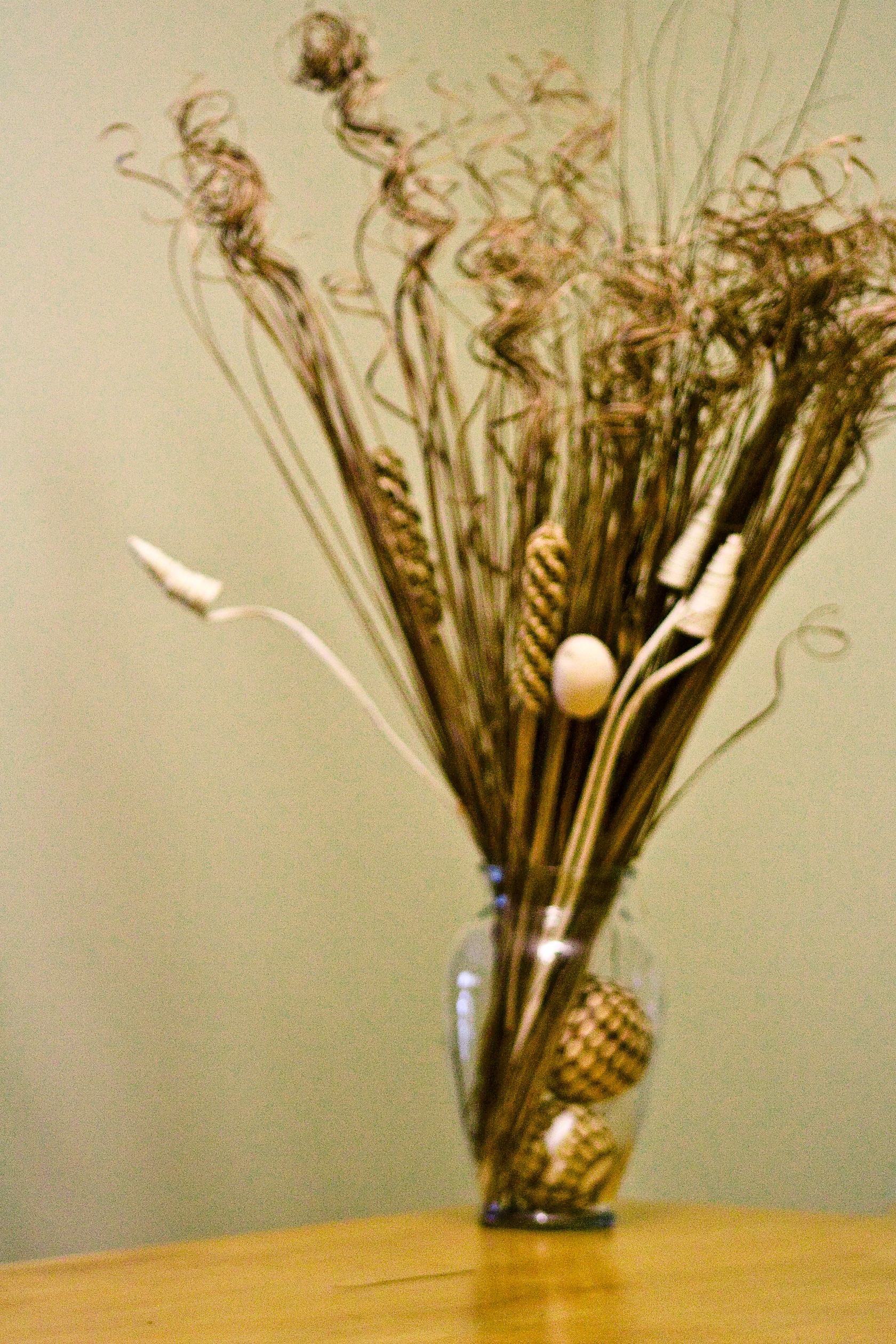 We notice that LIFE has many twists and turns.

Can we call them,

In the film, Evan Almighty,

Evan Baxter had been elected to the U.S. Congress.

During his campaign, he asked his hearers:

Through his reluctant, yet obedient act of building the ark commanded by God, Evan saved the lives of his family and many other people. He also brought about the downfall of a long-entrenched congressman. Through greed, this man  (though unwittingly) allowed the building of the dam which failed, thereby causing the flood.

At the end of the film, Evan Almighty, God repeats His message to Evan.

With a stick, He draws three letters in the dirt.

With a smile, God asks Evan:  "And how do you change the world?"

Then God answers His own question: 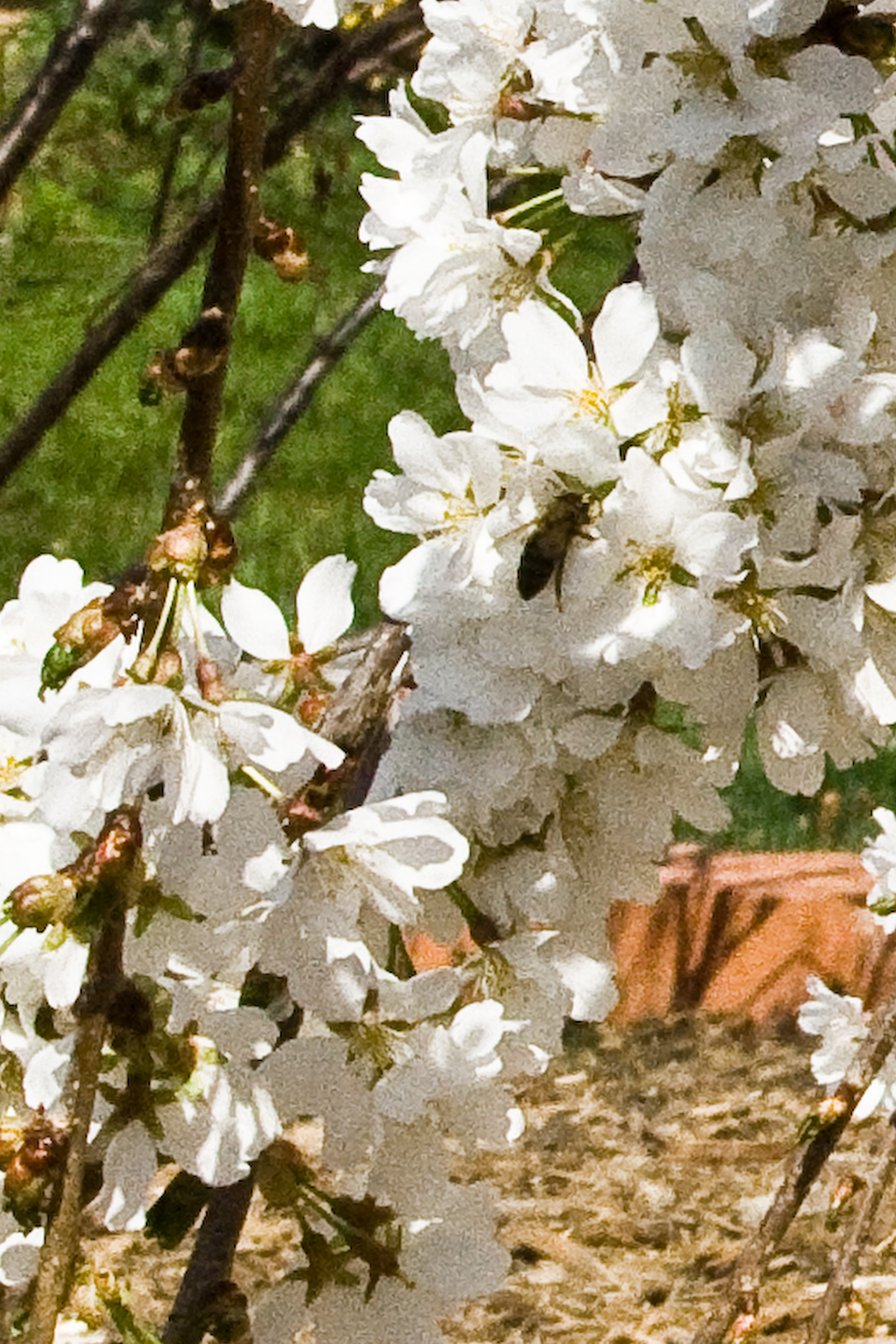 While walking through the neighborhood, we spotted "weeping" branches    covered with blossoms. Drawing closer, we identified a weeping cherry tree. This lovely sight lasts for only a few days, and then gives way to green leaves.

While we checked out the best photo-framing options, this busy bee arrived to do its job of spreading pollen from blossom to blossom, bush to bush, and tree to tree.

We were reminded that there is a poignant scenario unfolding now around us. Especially in the Western part of the world, the wild bee populations have dwindled to a dangerously low number. The cultivated bee hives tended by men, are therefore forced to protect the lives of their bees - and they're not succeeding because of the vast amount of insecticide poisons prevalent in gardens. The bees pick it up on their bodies and carry it back to their hives.

Do I care about the bees? Do I understand the inevitable results of this dilemma?   Before long, the natural cross pollination in the plant kingdom will cease - plants will languish - crops will not propagate and grow.

How then will we feed ourselves and our animals?

Some time ago, an unknown writer penned the following wisdom:

"For the want of a nail, the horseshoe was lost;

For the want of a horseshoe a horse was lost;

For the want of a horse, the rider was lost;

For the want of a rider, the message was lost;

For the want of a message, the battle was lost;

For the want of a battle, the war was lost;

For the want of a war, the kingdom was lost;

And all for the want of a horseshoe's nail."

In our Creator's plan, everything and everyone has a purpose.

May God have mercy on us for our blind and selfish ways!

We have believed the sales-pitch of the poison-producers, and we have polluted our planet.

Show us what must be done.

We confess to You, and appeal to You to rescue us

and this Earth which you have so lovingly created. 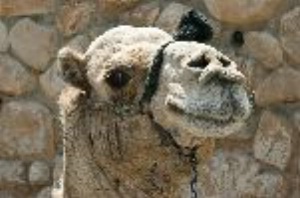 The camel has been called
the ship of the desert, and a
remarkable beast it is.
Camel at Qumran   (where the Dead Sea Scrolls were found)
photo by Joe Swick
There is an Arabian story about a man and his camel, and from time to time we should hear it again.

One cold night, as an Arab sat in his tent, a camel gently thrust his nose under the flap and      looked in. "Master," he said, "let me put my nose in your tent. It's cold and stormy out here."

"By all means," said the Arab, "and welcome" as he turned over and went to sleep.

A little later the Arab awoke to find that the camel had not only put his nose in the tent but his head and neck also. The camel, who had been turning his head from side to side, said, "I will take but little more room if I place my forelegs within the tent. It is difficult standing out here." "Yes, you may put your forelegs within," said the Arab, moving a little to make room, for the tent was small.

Finally, the camel said, "May I not stand wholly inside? I keep the tent open by standing as I do." "Yes, yes," said the Arab. "Come wholly inside. Perhaps it will be better for both of us." So the camel crowded in. The Arab with difficulty in the crowded quarters again went to sleep. When he woke up the next time, he was outside in the cold and the camel had the tent to himself.

The camel's nose is a metaphor for a situation where a small undesirable situation can become a very big and bad one indeed. United States Senator Barry Goldwater used it in 1958:

"This bill and the foregoing remarks of the majority remind me of an old Arabian proverb: 'If the camel once gets his nose in the tent, his body will soon follow.' If adopted, the legislation will mark the inception of aid, supervision, and ultimately control of education in this country by the federal authorities."

Looking at the American public school system today, and at those who administer it, we are forced to confess that Senator Goldwater was right on target. What he warned more than half a century ago, has indeed come to pass. May God have mercy upon us, and give us strength to cut that tree down, and to pull up every root.
Then by God's Grace, we will be able to start again, building upon the solid Rock of God's Word.
Have we really "heard it " this time?
Let's accept the warning, and ACT on it!
It is not too late -- BUT THE TIME IS SHORT!