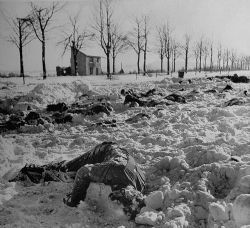 Bodies of American soldiers who, after being taken prisoners of war, were

machine gunned down in cold blood on Dec. 17, 1944 by German SS troops

under Col. Joachim Peiper in an incident which became known as

BATTLE OF THE  BULGE

German tanks pulverize everything in their path in this 1965 motion picture chronicling the Third Reich's counteroffensive against allied troops marching across Europe. Though the script is so-so, and the personal stories fictionalized, the battle scenes are spectacular.

The star of the film is the panzer: a tank wrapped in a thick hide of heavy metal. It is the new Achilles, seemingly invulnerable, a battlefield terror that lays waste with surgical precision during a campaign in the Ardennes region of Belgium, Luxembourg, and France between December 15, 1944, and January 15, 1945.

A German war room tracks the progress of the tank commander, Col. Martin Hessler Robert Shaw, a ruthless taskmaster who loves war. Arraying his tanks on a hilltop, he reduces an American-occupied town to cinders, smoke, and fear. Defending troops retreat, helping to create a backward "bulge" in the allied line, and in the process, ascribing a name to the battle. There is only one problem: Hessler's tanks are running out of gas.

Shaw is fun to watch, and hate, as he fashions Hessler into a monomaniac willing to risk everything for the pleasure of the kill.

His raw recruits, many mere boys, are ready to die for him, and they even break into a rousing song, the "Panzerlied," that whets his craving for blood. Henry Fonda portrays an American colonel who flies reconnaissance in heavy fog to find Hessler. He and other old warhorses (Robert Ryan, Dana Andrews, George Montgomery, Telly Savalas, and Charles Bronson) give adequate performances.

Hans Christian Blech portrays the most interesting character in the film: Hessler's toady, Corporal Conrad. Realizing that Hessler is a madman, he dares to reproach the panzer commander, condemning his brutality. In doing so, he shows that a German soldier can think and feel the prick of conscience. Of course, he loses his stripes. But he marches back to Germany drawing his coat about him -- and his integrity.

The musical score by Benjamin Frankel is brilliant. ~ Mike Cummings,

The above was taken from several sites on the world-wide web.

The history of our world is filled with events that "go down in infamy" - and most of them are covered with blood.

Some years ago we discovered the writings of John Dawson, a key leader in the missionary organization known as YWAM (Youth With a Mission). Dawson's books change lives. They clearly reveal the privilege and responsibility offered to us as  believers in the Word of God.

God's determination to destroy the works of the devil!

Personally, our family ancestors were involved with shedding of blood of men, women, and children around the world, and particularly in Europe.

The blood of the Crusades...

The blood of the religious wars...

The blood of the so-called World Wars, I and II.

It was in late spring of 2005 that I journeyed to the UK. There I met people who were active in the prayer expedition movement. In 1999, they and their associates counted 10,000 miles of prayer-walking over a period of ten years.

Following are excerpts from the winter 1999 edition of Arrowhead, the Bulletin of Prayer Expeditions:

"In the teenage years of this century, the world saw the three greatest missionary sending nations go to fight a war that resulted in the mindless slaughter of millions of young men from all over the world.

It was a war born out of arrogance and pride but it was also a war waiting to happen. Serbia and the Balkans, Ireland too, were in at the start of the century and again at the end of a century that has probably been the most genocidal ever.

"Ten million young men died in the First World War; thousands of their bodies [were] never recovered. (Incidentally this led to a rise in spiritualism as families tried to contact their dead!) It was to be our National Wounded Story...

"It has been said that the British army and the church never recovered from the First World War. Rick Joyner has likened the present state of the church to the trench warfare mentality of the Great War, where a small piece of ground is taken, only to be lost again, almost immediately. Where those who stick their head above the parapet are likely to lose it, sometimes by "friendly fire!" and where those who once had a broad vision have had it narrowed down to their own few feet of ground - their trench. We spend more time thinking of what the enemy is doing, than [of] the battle itself. 'If the enemy can keep us at stalemate he scores a victory'. We must not buy into a lesser vision than the one God has for us.

"When we visited these battlefields last year, there were places where one can almost hear the cry of the dead and we thought of God's words to Cain:

"Millions of young men from all sides lost their lives in the mud of Flanders, the Somme and Verdun as well as in other parts of the world. It was the sacrifice of the young men of the nations to the god of pride who demanded blood. We began to look at the situation in Ireland and we felt that God was saying that this too has been about blood sacrifice. In Irish legend, the goddess, Eire, an old hag, demanded the blood sacrifice of young men to keep her young and beautiful. So many people have died...

"God has spoken to us clearly about going in the opposite spirit to those who have gone before, to go in humility and repentance, to pray, seek His face, break bread, take Holy Communion or the Eucharist, so that the wounded land might be healed. So we went and wept and prayed, naive enough to believe that even in today's harsh world of reality, God, in Christ, can reach back into history and make us historically whole.

"The history of the first World War and the history of Ireland are strongly linked by the issue of the spilling of innocent blood.

"However, we have 'the blood that speaks better things than the blood of Abel'     (Hebrews 12:24) when Jesus 'bore our grief and carried our sorrows'  (Isaiah 53:4). So we put the cross down in places of great woundedness; we broke bread together many times, re-membering our Lord Jesus, putting His members back together again, and asking God to heal the land.

"Our personal Jordan...move into the Promised Land...but before we do, there are issues that we all have to face - both personal and national. As one Catholic priest said to us in Ireland, 'We must deal with all the baggage from the past, so that we can go over into the new Milenium and make a fresh start.' Just as people are shaped into who they are because of their history, so the same is true of nations. As an example, the problems in the Balkans are not so much about now, they are about 600 years of history. Ireland's problems stretch back over 800 years of bloodshed and injustice.

"There are areas where the enemy has a legal foothold because of all the bloodshed. The only answer is the power of the shed blood of Jesus.

"Although this walk was about confronting death in its most awful form, it was not a morbid walk. There was a sense of rightness, of light and of life as we saw how Jesus was victorious over death.

He went through it and came out, and we could too. We felt that this was happening in France, and we were a small part of it. Mary, one of the team, described what we were doing.

"The frontline runs like an open wound through France to this day, but as we walk I can see the Lord stitching the wound skillfully."

"We visited and prayed at memorials and cemeteries of all the nations involved. We wept with our German friends as several of them faced the pain for the first time. As we broke bread together in Vladslo German cemetary by the statues of the grieving parents, the sun came out and shone right on us. On a dull windy day it was as if God was saying,

"Gerhard said he felt that we were like John the Baptist, clearing the way.

"I realised that God was doing something in me before the walk but I was totally unprepared for the impact that confronting an incredible piece of history, virtually unknown to young Germans, would have on me. I have grown up under the burden of the Third Reich which overshadows everything else. As John began to pray for a new generation of Germans to bring blessing instead of death, I suddenly lost that longstanding sense of guilt for being German. Having confronted the issues of the Second World War, as a German, I now felt another piece of the jigsaw fall into place. From then on, I had freedom to pray life and healing into the land."  [Kat]

"...We stood at the Menin Gate in Ypres, Belgium, which has the names of 54,000 young men whose bodies were never found in that area. Every evening the Last Post is played there and we met Normandy Veterans from World War 2. Some of them wept as they recalled events of fifty years ago.

"'I'm sorry love, I shouldn't be crying, but I've just had a breakdown after 50 years. Its me mates who died you see - I can't remember all their names but I can still see their faces'.

"It was a privilege to pray for these men and feel the Holy Spirit touch them...

"BUT THERE WAS SOMETHING ELSE WE HAD TO DO...

"We finished our walk on June 30 and then went back to the Somme for a final meeting under the sombre arches of the Edward Lutyens Memorial to 74,000 missing, at Thiepval. This memorial is so imposing that its immensity dominates the landscape for miles around. Lutyens deliberately stripped the memorial of all Christian symbolism, because he felt that

'Men had lost their faith in God in these places and there was, therefore, no need for the consoling power of religion - only a memorial to death and to the superfluousness of God'  (from The Dead of the Somme by Geoff Dyer).

"Of all the places we visited on the Western Front, this was the place like no other that symbolized the draining away of men's faith in a good God. This place symbolises the shattered hopes and dreams of a generation. It was, therefore of great importance to Break Bread / celebrate the Eucharist in this place and thank God for His Presence and not His absence.

"Here we asked the Lord to bring all the dispossessed under the Blood, and to release them to righteous judgement. We asked for the restoration of the lost anointing to the church in Europe, the stolen seed that must be reclaimed and returned to the people of God.

"To help us do this, over one hundred people came from Britain and France...

"We can't tell what has been achieved by this prophetic action, but past experiences have shown us that our God does far more behind our backs than He does in front of our faces! So we shall see!"

[end of excerpts from the Arrowhead Bulletin of Prayer Expeditions, winter, 1999)

What has God done?

What is He doing now?

Searching for the evidence of God's reality, today we see His powerful Presence and history of His faithfulness. Current revelations prove the removal of old curses bringing miracles, forgiveness and reconciliation.

Let us believe the words of tried and trusted prophetic voices.

Your Kingdom come, Your Will be done,

on Earth, as it is in Heaven!

And let us allow God to love us through one another, as

He righteously judges us as individuals and as peoples.