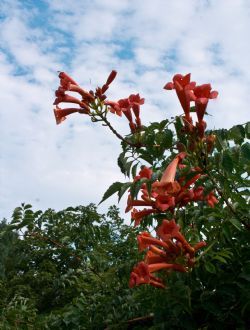 A Chorus of Trumpets Praising the Lord!

Jim had only seven years of earth-life in Christ.

But his influence will live forever.

He turned away from the rebellious life of a "hippie", surrendered himself to Jesus Christ,

and became God's instrument to rescue many other lives as well.

Jim was a worshipper, a Bible scholar, and a prophetic teacher who had a pastor's heart.

He was a husband, a father, a son, a brother and a friend.

In short, Jim Terrell was a JESUS-man, He wanted to please God.

If Jim had read the following prophetic message posted on the ElijahList website, he would have been excited. He loved God's Word, whether written thousands of years ago,

or by a contemporary prophet of today.

and a Year to Stand in Heaven's Open Window"

Dawning of a New Day

Recently, I prayed a simple prayer: "Lord, show me what the year 2010 will bring." As soon as those words were uttered, I saw an image. I saw someone standing inside a castle-like, stone building looking out through a large circular window. This person was looking towards a distant horizon. The dawning of a new day was just beginning.

The reflection of the early light was illuminating their face. The window was high up in an elevated position, many levels above the surrounding terrain. Because of where this person stood they were able to see the coming dawn before those who were still sleeping in the darkness at ground-level. This image reminded me of when I used to fly airplanes. I would pilot my aircraft into some distant airport just before sunrise. As I approached my destination I would be flying into the first rays of a new day.

As I continued to reflect on what I was seeing, I began to realize this was an image for 2010. God desires to position His people in a higher place of revelation so they can see what is coming. This higher place would change their perspective.

As I gazed at the image of this new dawn I heard the Lord speak to my heart, "2010 will be a year that I will open a window of Heaven. If you are willing, you can come up higher and I will let you see the things I have planned. 2010 will be a year to see the approaching future if you will heed My invitation to come up to a higher place and stand in the open window of My purpose and vision.

"I brought you into Myself and made you Mine - heirs of promise - before you took your first step of destiny. I gave it all to you before you could perform the works of My hand. In this new dawn there will be signs of a higher purpose I want My people to see in the coming year. In 2010 look for signs that will manifest in the systems of the earthly kingdom. These signs will reflect My heart.

"There is Coming a Fullness of Joy"

"A fullness of My presence is not yet upon you. As My Word says, 'Weeping may endure for the night, but joy comes in the morning.' I am asking you to look into the darkness and prophesy a new dawn. As you prophesy, My joy will fall in your camp. I am sending a joy to My people that will appear premature. This joy of Heaven will rise in you like the dawning of a new day.

"There is coming a fullness of joy for My people that will be as bright as the noon day sun. This new dawn of joy will be seen by you while the world still sleeps in a lingering night of despair. The sounds of your joy will be heard in the camps of darkness before the new day is realized. You will begin to dance in the approaching dawn. Come up and stand in the window of Heaven and see what I am about to do.

"If My people who are called by My Name will humble themselves before Me and seek My face in this new day, I will do a new thing in your midst. From the window of Heaven you will see the new dawn of joy before I call it to rise into the natural realm. All new dawns break in Heaven before they are seen in the earth.

"Come up and stand in the window of Heaven and see My coming heart and purpose for 2010."

Jim's prophetic understanding and his prayers helped to bring about the "watergate" revelations, and the resignation of Richard M. Nixon from the presidency of the United States of America.

While Woodward and Bernstein did their research and writing, Jim would circle around the White House complex in a car, praying as he drove.

Could these prayers have prepared the conversion and worldwide influence of Chuck Colson?

Are there such prayer warriors today on special assignment?

We believe there are.

[please also see the following regarding