There's a place in Virginia in the United States of America, toward which you are invited to turn your eyes.

In early June of 2008, this writer was drawn to it as surely as if a magnetic force pulled at my being. I suddenly knew that I must get off Route 81 and make a pilgrimage to Natural Bridge.

Awakening this morning, January 2, 2009, I remember the place and the strong sense of destiny which I felt there.  Physically, Natural Bridge is just that: a geologic formation where a strip of land (with a road upon it) crosses over empty space. 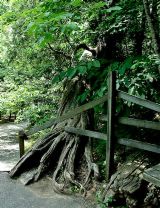 At the bottom of the bridge
is a small stream


I saw a tree with
protected roots

A Miracle in Stone ... Old as the Dawn

Natural Bridge has enormous proportions.  Man first discovered Natural Bridge a few hundred years ago. But Nature, through millions of years, had worked with patient labor and magnificent skill to construct this monument which would stand for all time. 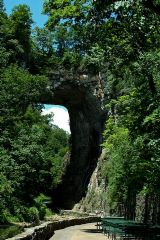 The arch is composed of solid grey limestone, 215 feet high

between the massive walls.  The span contains

If man had scales to weigh it, the mass would balance

The rocks that compose it are early Ordovician, or 300,000,000 years old.
The internal form of the rocks which form and break in the layers,
were imposed on them during the Appalachian Mountain building process
toward the end of the Paleozoic era, more than 200 million years ago.
At its highest point, the bridge is approximately 1160 feet above sea level.

This was Nature's material. Her tool was Cedar Creek, a simple mountain stream flowing toward the sea.  With these, Nature achieved her miracle.

She painted her masterpiece with dull red and ochre, soft shades of yellow and cream, with tracings of grayish-blue.

Before white men came to our shores, the Mohican Indians considered this a sacred site, and called it, "The Bridge of God".

According to legend, in 1750, the youthful George Washington, engaged by Lord Fairfax, proprietor of the Northern Neck of Virginia, surveyed the surrounding acreage around Natural Bridge.  During his visit, he scaled some 23 feet up the left wall of the bridge, and carved his initials, "G.W." which may still be seen today.

On July 5, 1774, Thomas Jefferson purchased Natural Bridge and 157 surrounding acres from King George III of England for the sum of "20 shillings of good and lawful money", (about $2.40).  Jefferson visited the bridge often, surveyed the area, and even drew a map in his own hand...

The Lee Highway, U.S. route 11, crosses over the Natural Bridge, even today.

[The above description of Natural Bridge and its history was copied from a display at the site.]

To grow between the rocks.

in such a setting

to those with open ears.

Our Roots Must Be Protected

firstly, the protection of the ancient tree.

Secondly, it discourages attempts to climb the tree,

Now, let us consider the above as a metaphor to

recapture and protect our national roots.

Our Fathers must be honored

Our Constitution and Bill of Rights protected

Our Judeo-Christian values honored and followed

And we must sing to ourselves and to America:

For God and Country, I now give my life.

For God and Country, in a world full of strife,

I'll sing for My Savior, and work in this dear land,

For God and Country I will now take my stand!

God Who made you great!