Get Your Hopes Up!"

Daily prophetic word on December 31, 2016: A new gate is opening in the spirit as God is releasing a backlog of revelation and blessings.

2017 is going to be a time in which many of the least likely people begin to awaken to God's love. A long-awaited start of global awakening and revival will take place. Many of these people have been rejected by the Church, but God is saying, "I have not forgotten them and their cries have reached my ears."

Praise the Lord, all you nations; extol Him, all you peoples. For great is His love toward us, and the faithfulness of the Lord endures forever. Praise the Lord. Psalm 117:1-2 (NIV)

The world is going to awaken to the awesome power of the Lord. There is a reason for all the turmoil and attacks. It is the enemy not wanting us to see what God is about to do. God is more powerful than satan and some people have fallen into the trap of looking at the storms and believing this is judgment against us. God has a solution in the midst of it all that will unfold in 2017.

Due Season is Now Overdue

The lives and ministries of people were brought into the Courts of Heaven over Rosh Hashanah last October 2016. Last year, the Lord examined our lives with the highest level of the heavenly court system. Daniel 7 "Ancient of Days" court sessions were held over us all. This is similar to the level of the Supreme Courts on Earth.

Everyone went through an assessment to see if we are ready to advance to the next level with the Lord. Many people were promoted spiritually this year and the Lord is now releasing special plans and assignments for those who have walked through the painful preparation it takes and are crying out for mercy and not judgment.

And let us not grow weary while doing good, for in due season we shall reap if we do not lose heart. Galatians 6:9 (NKJV)

I heard the Lord say, "This is your due season and it is overdue for many." Do not give up as this is a season to reap. It is not far off. Things are going to begin lining up for you over the next few months. The Lord has not forgotten you! For many, the very reason you came to Earth is about to be revealed in 2017.

Expect to see backlogs of blessings and unanswered prayer come to you over the next 3 months. Between now and March things will start to line up with greater clarity. What currently looks like losses will suddenly turn around for many people. Though it seems that darkness is winning, after March this is going to take a quick turn for the good.

I will give you hidden treasures, riches stored in secret places, so that you may know that I am the Lord, the God of Israel, who summons you by name. Isaiah 45:3 NIV

Angel is Ready to Dance

God spoke to me that many forgotten prophetic words from the past are coming to us in 2017.

I had a spiritual experience at Rosh Hashanah on September 28, 2011 in which I saw an angel that was in position and about to dance. In the vision the place where I saw the angel standing looked like a combination of San Francisco, Las Vegas and Hollywood.

The Lord said that when this angel dances it will shake things open and release finances, favor and an anointing to bring people into God's Kingdom. In the experience, many of us had been waiting a long time for this angel to dance. Then without warning, it danced and the ground shook, and golden coins filled the streets.

This is the release of Kingdom finances that will be needed to impact the world for God. It is also a shaking coming in the way we do things. Watch for this angel to dance over your city!

There are going to be two moves of God:

1. The first is going to be inside the Church and in the lives of Christians-it is designed to awaken and prepare us.

2. The second is a wave of revival that will be geared to those who have been rejected by Christians or have been considered unclean or even an abomination.

What is coming might seem to be a stretch to many people, as some of our current ways of doing things will not work to reach those who have been rejected. I have been prophesying this for a number of years now and I call this group the spiritual outcasts. They are the ones that did not fit into churches or had a bad experience and went away, never to return.

This year will be the start of the Billion Soul Revival-though it will not look like it on the surface. Do not despise humble beginnings. The late prophet Bob Jones prophesied this revival would happen. Sadly, Bob died in 2014 without seeing the fulfillment of it.

On September 22, 2016 I heard a counsel meeting in the Courts of Heaven. It was about Bob Jones' life and ministry and his prophecy of the Billion Soul Revival. Many people have forgotten about it, but God has not forgotten this prophetic promise and plans are being made now to fulfill it on Earth.

During the counsel meeting, the tasks of fulfilling the revival were split into thousands of assignments. No one man or woman could carry this mantle alone. Bob carried the strategies, but now the actual fulfillment plans are being released to us.

The Jesus People movement of the late 60s and early 70s was the last known revival in North America. This was a theologically messy movement as many hippies turned on to Jesus and became Jesus Freaks.

The Jesus People movement started in San Francisco and was taken to Southern California and then to the world. This movement had a strong belief in miracles, signs and wonders, faith, healing, prayer, the Bible and powerful works of the Holy Spirit. It changed the face of Christianity and broke the religious spirit of that day. Sadly, it was rejected by the majority of the Church.

There is a new Jesus People movement that is going to start in San Francisco again. It will not start with the hippies as it did then, but it will be among the sexually broken and the fatherless generation crying out for God's love. 2017 will mark the start of something new in San Francisco that will go to Southern California and then to the world. 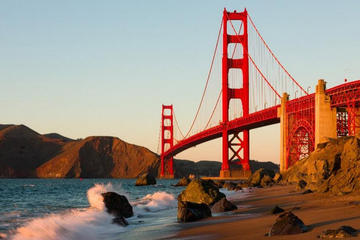 The Lord spoke to me to go to San Francisco on New Year's Eve 2016 and open a gate in the spirit that will release the strategies for the next coming revival. I tried that night, but it would not open until the next day when I repented on behalf of all the people who have cursed and judged San Francisco.

As I removed these curses, the gate opened over the city of the Golden Gate. This is a key to opening revival and blessings over your house, church, business, city and nation.

The Glory of God is Returning in 2017

During the Jesus People movement in the early 1970s there was a strong presence of God's glory. It was like a liquid anointing or tangible atmosphere that could be felt by many people. Without God's greater glory and power, we will not be able to be part of a revival and movement as big as what God has in store for us.

In 1975, the Lord spoke to Bob Jones that the greater glory of God was going to leave the Church because it was used for man's gain instead of for revival and the Lord's work. On March 17, 1977, Bob saw this glory lift from the Church and it has not returned since. Yes, there are people who still carry portions of it, but overall, the glory of God has not been on the Church at large since that time.

March 17, 2017 is the 40th anniversary of the glory departing. This is the year that the glory of God is going to return to the Church. Like the glory of the 1970s it will not be limited to the four walls of a Church. Similar to the Jesus People movement, the Glory of God is coming with signs and wonders, healing and miracles and will begin to touch those outside the church and into the streets.

In closing, I am not saying all of these things about the big revival will take place in 2017, but God is planning and positioning us for them.

This will indeed be a year that started out looking evil and dark but will end with greater hope and more of the light of the Lord being released.

Get your hopes up as God has not forgotten you!

Doug Addison is a prophetic speaker, author and coach. He is known for his Daily Prophetic Words, Spirit Connection webcast, podcast and blog. Doug's message of love, hope and having fun reaches people around the world! His powerful, positively funny teaching style and coaching helps open people to discover their destiny and experience God's supernatural love and power. He and his wife Linda live in Los Angeles, California where he is impacting the arts, entertainment and media industries.