Word of the Lord, "Texas, as you pass through the waters I am with you. I am raising you as a pulpit for the nation."

The Lord has been speaking to me about Texas as I have watched the news stories of the intense rains and severe flooding of this state that had formerly experienced extreme drought. In the last two years they have had consecutive once-in-every 500 years floods, which tells us they are very, very unusual rains.

The I-35 Highway of Holiness is Being Uncovered

In Isaiah 35 it speaks of a desert and parched land being made glad (verse 1). It speaks of water gushing forth in the wilderness and streams in the desert (verse 6). The next verse tells of the burning sand becoming a pool and the thirsty ground becoming bubbling springs. Verse 8, then says, "And a highway will be there; and it will be called the Way of Holiness."

I believe that a "Highway of Holiness" is being uncovered all up and down the I-35 corridor of Texas. This corridor goes through Dallas, Denton, Fort Worth, Waco, Austin, San Antonio and Laredo. God is raising up Himself a cleansed pulpit from the state of Texas. It is not limited to the cities on the I-35 corridor but it is definitely highlighted there. Houston, Corpus Christi and McAllen are also places of significant emphasis as bright pulpits of reformation will shine from these places as well.

California is the Stage - Texas is the Pulpit

I was shown that at a national level: California is the stage and Texas is the pulpit. There is an increasing unity between spiritual leaders of these two states developing as this is an orchestration of the Holy Spirit. 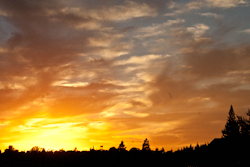 I have observed over the years that drought is often a reality when Jezebel, Baal and the religious spirit is being confronted. Israel experienced that in Elijah's day, and we also observed this in Atlanta some years ago. When the drought breaks it has meant that Jezebel, Baal and the religious spirit have lost their stronghold grip. It means the covering veil for these no longer is working and exposures and eliminations are forthcoming. This will be the next reality on the Church mountain in Texas.

Why the Texas/California Integration is Important

In the natural these two states tend to pull in opposite directions, with Texas pulling right and California pulling left. Likewise the advancing Church in each state tends to pull in opposite directions but must now make the adjustments. Texas leans towards Truth and Righteousness (personal) and California leans towards Love and Justice (social). We ultimately want a national stage and pulpit that incorporates all four focuses, but it is of utmost importance to have them in the right order.

Error generally happens by an overemphasis on that which is good to the detriment of that which is priority. We walk with two legs but must always lead with one or else we are hopping. If we separate Love and Truth as two legs, then we see it is most important to lead with Love. (John 3:16 begins with, "For God so Loved the world..." as opposed to, "For God so needed to remind the world of His commandments".)

In the debate over our national morality, a religious spirit will have us leading with "truth" and by the time we mention the love, those who are morally broken already feel judged and rejected and cannot receive the love. The Bible tells us to "speak the truth in love" establishing the fact that being in "love" is the priority.

If people can't discern the love, the truth is actually missing its essential ingredient. Jesus modeled this for us, ever increasing in favor with the common sinner while reserving His harshness for the impervious-to-love religious ones (Pharisees, Sadducees and Scribes).

Now in all this conversation, I am generalizing trends of Texas vs. California and there are of course multiple exceptions. Overall the Lord will have an advancing Church whose lead foot is love, but then is strong in truth, personal righteousness and social justice.

To be a Highway of Holiness we must carry all four (love, truth, righteousness and social justice), and do so with love in the lead. This is something that must be generated from the Mountain where the Church is at and not the Mountain of Government.

I believe the coming days will see Texas step into an important place of national leadership and that a significant part of it will be spiritual and moral compassing that looks like Jesus.

I also see natural economic prosperity being a significant part of this raising up that God is doing with the state of Texas and in that will be long awaited breakthrough for Kingdom-minded entrepreneurs. A cornucopia longhorn of plenty is about to be poured out and it is for an extended season of breakthrough reformation. Make sure you are in that narrative as the plenty is not for the survival-minded. It is the "Kingdom age" and Texas has a protagonist role in it.

Johnny Enlow is a social reformer, international speaker, spiritual mentor, and author of The Seven Mountain Prophecy, The Seven Mountain Mantle, and Rainbow God. He and his wife Elizabeth are focused on awakening individuals to their call to provide practical solutions from the heart of God for every problem in society - until the real God of all of life is displayed in the seven primary areas of culture in all nations: Media, Arts and Entertainment, Government, Family, Religion, Economy, and Education.