There are millions of people with authority to change the political, social, and financial status quo.

They have authority to stop wars . . . to defeat enemies either with, or without arms and weaponry.

-- Who are these millions? To what group(s) do they belong?

-- From what source comes the powerful authority which they possess?

Their authority is a matter of relationship.

To know who we are, and why we live on planet Earth, is the

knowledge that frees us from the lies of the devil. It will blow away the spider-webs of doubt and confusion. It will open the windows of our hearts and of our minds to the sunshine of God's love.

FOR THE GOD OF THE HOLY BIBLE

AND WILL NOT LIE !

When we read and hear His Word, and his gift of faith is divinely placed within us, a whole new life begins.

Before David the son of Jesse rescued the people of Israel by killing the giant, Goliath, he came to know his God. As he tended his father's sheep in the wilderness, he sang hymns of praise to God, as he played his harp.

By the time David wrote the following, he was the mighty King David of Israel. Through David's guidance, and musical and literary gifts from the LORD, Israel praised, thanked, and worhipped their Father God. During the 33 years when the Ark of the Covenant rested in the Tabernacle at Jerusalem, the worshipping, priestly families took turns. Seven days a week, and twenty-four hours a day, for 33 years, they worshipped God non-stop. During this period, Israel was not attacked - not even once - by its enemies.

The manifestation of God's love and protecting Presence must have been truly awesome for the Children of Israel!

Sing praises to the Lord, who dwells in Zion;
Declare among the peoples His deeds.

For He who requires blood remembers them;
He does not forget the cry of the afflicted.

Be gracious to me, O Lord;
See my affliction from those who hate me,
You who lift me up from the gates of death,

That I may tell of all Your praises,
That in the gates of the daughter of Zion
I may rejoice in Your salvation.

The nations have sunk down in the pit which they have made;
In the net which they hid, their own foot has been caught.

The Lord has made Himself known;
He has executed judgment.
In the work of his own hands the wicked is snared.   Higgaion Selah.

The wicked will return to Sheol,
Even all the nations who forget God.

For the needy will not always be forgotten,
Nor the hope of the afflicted perish forever.

Arise, O Lord, do not let man prevail;
Let the nations be judged before You.

Put them in fear, O Lord;
Let the nations know that they are but men.   Selah.

When the people of today who know their God, arise in the faith and power of Yeshua, God's Son, they will sing as David did. They will, like David, see their enemies put down by the angelic armies of God.

After David, in the reign of King Jehoshaphat of Judah

(2 Chronicles 20), a miracle occurred when God used a prophet to give directions to the King. As the king believed and obeyed the prophet's words, the armies of three invading nations destroyed each other, and left their wealth there on the field for the Jews to gather and take back to Jerusalem.

What was the victorious strategy, whispered to the prophet, then spoken to the King and to the People?

They were to thank, praise and worship the LORD. They were not required to use their weapons. . . only to sing their trust and worship of their GOD! When they obeyed, an invisible angelic army caused the menacing enemies of the Jews to destroy each other.

So it will be again, we believe, as the Mighty One of Israel,

the Lord of Hosts, shows Himself in our time, strong on behalf of His Covenant People, Israel.

On March 3, 2015 a reasonable, truthful man named Binyamin Netanyahu stood before the American Senate and House of Representatives. He spoke calmly, he spoke responsibly -- with historical accuracy and with literary knowledge, giving honor to those who heard him, and to those who were 'politically absent'.

Most of all, Prime Minister of Israel, Binyamin Netanyahu spoke with supernatural certainty because he knows that the Holy One of Israel, the God of the Universe, is His defense.

He knows that God is jealous for His People Israel, and for the land to which they have returned.

Netanyahu, as he neared the end of his speech to the U.S. Congress, called attention to the memorial on the wall opposite the speaker's desk. It was an artist's rendering of the head of the prophet and law-giver, Moses. 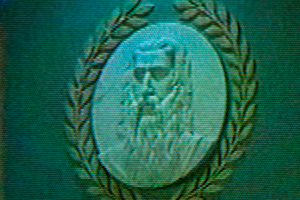