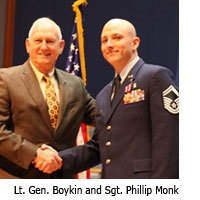 It was a long journey, but Master Sergeant Phillip Monk finally retired from the U.S. Air Force -- on his own terms. After 20 years -- the last few of which he spent fighting a different enemy -- the distinguished airman finally closed the book on his distinguished career in the U.S. military.

FRC's own Lt. Gen. Jerry Boykin retired Sgt. Monk, who became a national figure in the debate over religious hostility in the military when he was read his Miranda rights for telling his lesbian commander that service members shouldn't be punished for believing in natural marriage.

Despite pressure, Sgt. Monk refused to back down and was rewarded for it.

In February of last year, he was presented with the Meritorious Service Medal for his contributions to his country.

Friday's ceremony was the crowning moment of those 20 brave years, as both Lt. Gen. Boykin and Pastor Steve Branson helped thank Sgt. Monk for his sacrifices in defense of this nation -- and its freedom.

In a fitting tribute, Aaron and Melissa Klein, the bakers who lost their shop over a similar intolerance to their biblical beliefs, made the cake for the celebration. We congratulate Sergeant Monk and his family on his retirement and look forward to the next chapter in his service to God and country.