Leo Hohmann is a news editor for WND. He has been a reporter and editor at several suburban newspapers in the Atlanta and Charlotte, North Carolina, areas and also served as managing editor of Triangle Business Journal in Raleigh, North Carolina.

Sheriff David Clarke of Milwaukee County, Wisconsin, has a suggestion for those protesting against police under the slogan "black lives matter."

If they are truly concerned about black lives, they might want to consider moving their protests to the front of abortion clinics, where black babies are being killed daily with medical precision by men and women in clean white coats.

The sheriff, who is black, appeared in a CNN interview 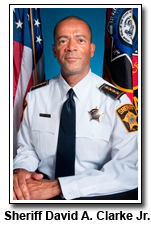 with Poppy Harlow Dec. 26 and said he did not think the protesters' complaints against police had any merit but that he would be willing to discuss the issue of police brutality if someone were to provide hard data "absent the emotion" showing that there is a problem. "Then let's sit down and have an objective discussion," he said. In 2012 and 2013, he said, 80 percent of the murder victims in Milwaukee were black and 70 percent of the suspects charged with their killings were black.

Yet, Harlow cited a recent CNN poll that shows 42 percent of non-whites in the U.S. believe police are prejudiced against blacks.

Clarke said there are a lot of lies and myths spread about police by those with political agendas.

Since 1999, police use of deadly force against black males is down 75 percent, Clarke said.

"So I'm just saying let's put the data out there, and let's have an objective discussion, minus the emotion and minus the rhetoric."

Clarke said it is police who are "in the trenches every day trying to stop blacks from killing each other."

Harlow asked Clarke about a controversial tweet he sent to New York Times reporter Mitch Smith suggesting that the protesters really aren't all that concerned about black lives.

"If only these faux protestors were asked by media about all the black-on-black killing or black babies aborted in US every year," Clarke tweeted to Smith.

"Did you say that in a tweet?" Barlow asked?

"Yes I did," Clarke said. "When I hear these things that 'black lives matter,' the only people who really believe that statement are American police officers who go into American ghettos every day to keep people from killing each other. All right, so, yes I did say that and I meant it. Look, the abortions? If black lives - if they really mattered, that's where the outrage would be, that's where we'd see protests."

Praise from a black pastor

Peterson hosts a radio show, pastors a church and oversees a private school while also ministering to black people in prison and juvenile detention centers. He also writes an exclusive column for WND every week.

"He's 100 percent correct," Peterson said. "If black lives matter, why is it that they are not shutting down some of these clinics, if not all of them?"

"Over 70 percent are in inner cities," he said. "So if black lives matter, why don't they stop this insane abortion that's happening every day?"

Out of all the abortions in the United States, 36 percent are performed on black women, according to LifeNews.com, even though blacks only make up about 12 percent of the U.S. population.

"But what's going on in New York right now and many other cities, here in Milwaukee as well, is this unjustified hatred toward the police," he said in the CNN interview. "And that pathway was created recently by some very powerful people in the United States who have made some very inflammatory comments about our American police officers, that being Mayor de Blasio, that being President Obama and that being Eric Holder."

"They created that pathway for purely political purposes, and I think that's what the shame is here."

Many officers turned their backs on the mayor during the Dec. 27 funeral, believing he has not supported them.

"These individuals (Obama, de Blasio and Holder) have had several chances to come out of the gate and say something responsible, and say something to calm things down," Clarke told Harlow. "I'd like to hear from Mayor de Blasio now because I think there's a way forward for him.

"But the first thing he needs to do is disavow any association with the race hustler Al Sharpton."

"He is divisive, and he spews hate," he said.

"I think that would be a huge first step for the mayor and would be a good-faith gesture toward the police department," Clarke continued. "If it weren't for the NYPD police officers, that city would collapse into utter chaos, and he knows that, but again politics trumped reasonableness for the mayor and now the chickens are coming home to roost."

Peterson also echoes Clarke's concern that, if black lives matter, why are the protesters not protesting to stop the black-on-black crime?

"These black youths are killing each other like nobody's business and there's no outcry, not one iota about it," Peterson said.

"If black lives matter, why are they not encouraging young black couples to get married before they have children?" he asked. "These kids are growing up and they have only one parent and no one to guide them and correct them as they grow up. So if black life mattered, I'm trying to figure out who it matters to, because it certainly doesn't seem to be important to the protesters, to the black politicians like Jesse Jackson and Al Sharpton, the Urban League, the Congressional Black Caucus, the NAACP and many black preachers. It doesn't seem to matter to them about black-on-black violence, abortion and the number of out-of-wedlock births."

Over the span of one generation, the abortion industry has turned a trick on black families, said Peterson, who has led many pro-life protests, including one recently at Mississippi's last remaining abortion clinic in Jackson. In that one Mississippi clinic, 63 percent of all abortions performed are on black women, according to LifeNews.

"When I was growing up in Alabama, abortion was unheard of," said Peterson, 64, but now black women lead the way in the number of abortions being performed.

Peterson says the answer to this problem lies within individual black people.

"It's because black life doesn't matter and black Americans need to get over their blackness and return to character building," he said. "Most blacks are suffering due to lack of moral character, and that is not a race issue. They need to return to God and build character out of the love of what is right, not out of color.

"They have to get over their blackness, and that way you will judge people based on character, not color."

He said high moral character would "require you to get married, raise your own child, and not depend on the government or any other person to lead you as an adult. That is the problem."

Peterson said he does a lot of work with kids in public schools and juvenile detention centers.

"And it's getting worse because people are not getting over their color to build character," he said. "These people need a father and a mother guiding them and protecting them and teaching them."

So Peterson's advice to the younger Clarke is, keep speaking truth to power.