'PASSION' STAR: 'YOU HAVE TO TAKE JESUS'

Actor Jim Caviezel never imagined the physical and spiritual battles he would have to endure when he took the role of the Son of God in Mel Gibson's 2004 blockbuster "The Passion of the Christ."

Appearing at the Rock Church in San Diego, Caviezel told the congregation he was wounded during a whipping scene and struck by lightning during the final take. 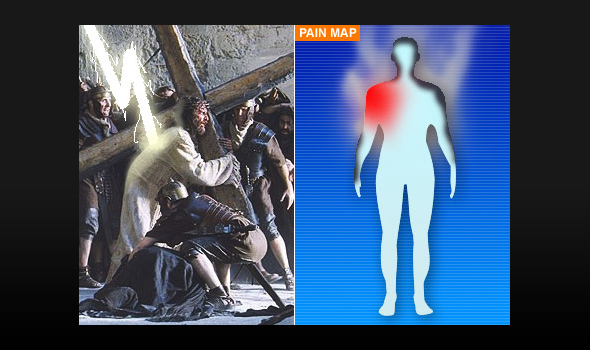 "The whip went over, and I had a 14-inch gash on my back. I went right down like in a football game when you get the wind knocked out of you. I saw God," Caviezel said.

Caviezel tried to stay in character the whole time, which led him to constantly feel unworthy to play the Savior.

"I never thought I was good enough," he said.

There were some light moments, however, such as the time Caviezel told Gibson not to take his Father's name in vain while he was in character on set.

The most frightening yet powerful incident occurred on the final day of filming, during the crucifixion scene.

Caveizel said he felt a foreboding heaviness as he climbed the hill.

"I felt this evil presence come over me. 'You're a dead man.' I remember thinking this is the best news I've ever had, because I know if I die I'm going to heaven."

While on the cross, Caviezel's body was blue from the pneumonia and breathing problems he'd been experiencing. Then a bolt of lightning came out of the storm clouds and struck him while he was hanging.

"What people witnessed was an illumination around my body and a fire on the right and left side of my head. And for one moment I was looking at myself from outside my body," he said.

Many of the actors were indifferent about their roles in the movie, Caviezel said, but they all reacted with awe.

"When I was hit, everybody fell on their face," he said. "The ground shook and that was the last shot of the movie."

Today, Caviezel is part of an audio New Testament Bible series, "Word of Promise," which he helped narrate along with an all-star cast.

Acknowledging that many are going through tough times, Caviezel said: "You have to take Jesus Christ into your life every day. He's the one that encourages you to fast, to not just pray once a week. The Gospel is real! It's not something you just put away."

Before wrapping up his talk, Caviezel made a special appeal to anyone who had had an abortion or paid for one.

"Many people are a part of this great sin in this country. These are all God's children and he brings them home. Now he wants to bring you home. Do you think your friend has more grace than God? Does your friend have more love than the Creator? It can never be. God forgives you and now he needs you to begin, to accept forgiveness."