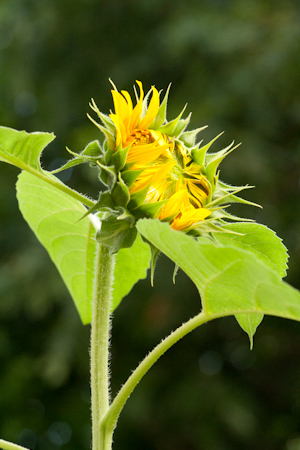 The sunflower grows from a seed,

upon a single stalk.

then grows and grows,

reaching at times a width of four, 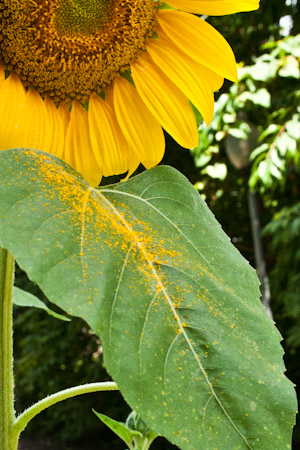 As petals begin to unfold,

one or several at a time,

the center with its seeds is revealed.

Pollen develops, and is gradually released from the

as the seeds grow beneath  them.

Suddenly the day arrives when 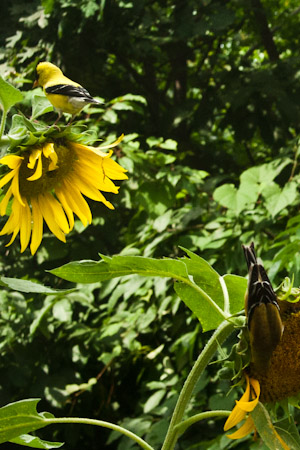 a pair of goldfinches

alight on the sunflowers

and begin to harvest

one at a time. 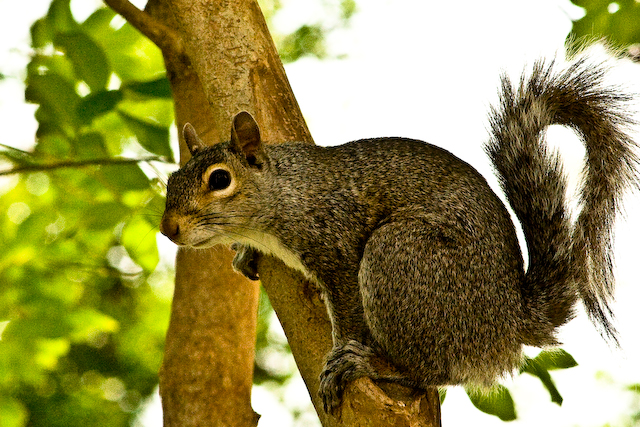 Then the nearby squirrels get into the act, looking for any seeds which have fallen. Finally, they attack each thick sunflower stalk until it breaks, causing the seed-laden flower to fall to the ground, be easily pulled apart and plundered. 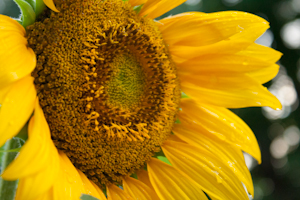 It is remarkable how the sunflower seeds got into the large pot on my porch. My hands did not plant sunflower seeds into that pot. Last fall these seeds fell from the balcony of the apartment above my own.

For years my upstairs neighbor had taken delight in growing sunflowers on her porch to attract both birds and squirrels to her second-floor balcony. The squirrels nimbly made their way up a crepe myrtle tree. The lady also spread seeds out during the entire season and her sweeping - along with wind gusts - sent sunflower seeds onto my porch below.

A smaller pot on my porch (with very little soil in it), had received more than ten seeds which rooted and grew smaller sunflowers!

These sunflower gifts came to me from an unfriendly source when the lady's seeds dropped to my level. I was forced to sweep them away, yet some became a blessing for me. I was led to the Book of Psalms and read again from Psalm 37 --

A Psalm of David.

Do not fret because of evildoers,
Be not envious toward wrongdoers.

Trust in the Lord and do good;
Dwell in the land and cultivate faithfulness.

Delight yourself in the Lord;
And He will give you the desires of your heart.

Commit your way to the Lord,
Trust also in Him, and He will do it.

He will bring forth your righteousness as the light
And your judgment as the noonday.

Rest in the Lord and wait patiently for Him;
Do not fret because of him who prospers in his way,
Because of the man who carries out wicked schemes.

Cease from anger and forsake wrath;
Do not fret; it leads only to evildoing.

For evildoers will be cut off,
But those who wait for the Lord, they will inherit the land.

Yet a little while and the wicked man will be no more;
And you will look carefully for his place and he will not be there.

But the humble will inherit the land
And will delight themselves in abundant prosperity.

The wicked plots against the righteous
And gnashes at him with his teeth.

The Lord laughs at him,
For He sees his day is coming.

The wicked have drawn the sword and bent their bow
To cast down the afflicted and the needy,
To slay those who are upright in conduct.

Their sword will enter their own heart,
And their bows will be broken.

Better is the little of the righteous
Than the abundance of many wicked.

For the arms of the wicked will be broken,
But the Lord sustains the righteous.

The Lord knows the days of the blameless,
And their inheritance will be forever.

They will not be ashamed in the time of evil,
And in the days of famine they will have abundance.

But the wicked will perish;
And the enemies of the Lord will be like the glory of the pastures,
They vanish-like smoke they vanish away.

The wicked borrows and does not pay back,
But the righteous is gracious and gives.

The steps of a man are established by the Lord,
And He delights in his way.

When he falls, he will not be hurled headlong,
Because the Lord is the One who holds his hand.

I have been young and now I am old,
Yet I have not seen the righteous forsaken
Or his descendants begging bread.

All day long he is gracious and lends,
And his descendants are a blessing.

Depart from evil and do good,
So you will abide forever.

For the Lord loves justice
And does not forsake His godly ones;
They are preserved forever,
But the descendants of the wicked will be cut off.

The righteous will inherit the land
And dwell in it forever.

The mouth of the righteous utters wisdom,
And his tongue speaks justice.

The law of his God is in his heart;
His steps do not slip.

The wicked spies upon the righteous
And seeks to kill him.

The Lord will not leave him in his hand
Or let him be condemned when he is judged.

Wait for the Lord and keep His way,
And He will exalt you to inherit the land;
When the wicked are cut off, you will see it.

I have seen a wicked, violent man
Spreading himself like a luxuriant tree in its native soil.

Then he passed away, and lo, he was no more;
I sought for him, but he could not be found.

Mark the blameless man, and behold the upright;
For the man of peace will have a posterity.

But transgressors will be altogether destroyed;
The posterity of the wicked will be cut off.

But the salvation of the righteous is from the Lord;
He is their strength in time of trouble.

The Lord helps them and delivers them;
He delivers them from the wicked and saves them,
Because they take refuge in Him.