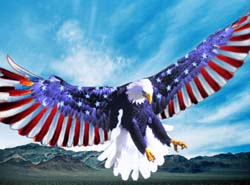 A GOOD WEEK FOR AMERICANS

Christopher Monckton of Brenchley, high priest of climate skepticism, advised Prime Minister Margaret Thatcher, wrote leaders for the Yorkshire Post, was editor of the Catholic paper The Universe, managing editor of the Telegraph Sunday Magazine, assistant editor of Today, and consulting editor of the Evening Standard. He invented the million-selling "Eternity Puzzles," "Sudoku X" and a promising treatment for infections. See the Science & Public Policy Institute.

People of America, July 4 is your day. Eleven score and 18 years ago, your founding fathers brought forth on your continent a new nation, conceived in liberty and dedicated to the proposition that all men are created equal.

Ever since that day, all nations have had cause to give thanks for your athletic democracy and for the celebration, champion, guarantor and hope of liberty worldwide that was and is America.

In your nation, the government is the servant of the people, and not the other way about. The little guy has the right and the opportunity to become the big guy. All are equal before the law. None may be punished except by due process of law. Congress shall make no law respecting any establishment of religion.

Until the Unaffordable "Care" Act, that is.

Suddenly, corporations and convents were told that Congress had made a law respecting all establishments of religion, for under Soetero"care" they were now required to sign a form repudiating that most precious of all Christian beliefs, that thou shalt love and that, therefore, thou shalt not kill, and especially that thou shalt not kill a blameless child in the womb of its mother, whether by abortion or by abortifacient contraception.

They were required to agree to pay for their employees' abortions or contraceptives.

Just as Henry VIII required (unsuccessfully) that Saint Thomas More should sign the Oath of Supremacy that placed the king, not the pope, at the head of the Church in England, so King Barack I required (unsuccessfully) that closely held corporations such as Hobby Lobby, owned by the Green family, and Conestoga Wood Specialties, owned by the Hahn family, should sign a humiliating form obliging them to abandon their religious belief and pay for the slaughter of the innocents.

They said No, even though under the savage provisions of King Barack's freedom-destroying legislation they could be fined in the millions or tens of millions. They stood by their consciences and by their rights under the Constitution.

They bravely fought the case all the way to the Supreme Court. By a 5-4 ruling, the Supremes found that the requirement to sign the king's Form of Supremacy was unlawful in that it compromised their freedom to live, and to administer their corporations, in accordance with their religious beliefs.

Naturally, the two rubber stamps appointed by the king to the Court - the dreadful Kagan and the appalling Sotomayor - voted in support of the pro-death, Kill-Them-All faction, whose shrieking representatives were chanting zombie-like slogans on the steps outside the courthouse.

Now, the Declaration of Independence says: "We hold these truths to be self-evident, that all men are created equal, that they are endowed by their Creator with certain unalienable rights, that among these are Life, Liberty, and the pursuit of Happiness."

I have never understood how the Supreme Court, in the infamous Roe v. Wade case, could possibly have considered the dismemberment of children in the womb, sometimes without even the administration of an anesthetic, to be a course of conduct that was in any way consistent with the little children's "unalienable right" to Life.

But at least the Supremes - or at least the narrow anti-death majority that currently exists there (long may they live) - have begun to do the right thing by making it plain that family businesses cannot be bullied by King Barack into signing his dismal Form of Supremacy on pain of fines so massive that Hobby Lobby could have found itself almost $500 million poorer every year.

No small part of the role of a proper Supreme Court is to prevent tyrannically minded adminstrations from doing what the left, in particular, are all too prone to do: from insisting that if they disagree with the sincerely held religious beliefs of their subjects on whether baby-butchering, say, is a good thing, their subjects must change their beliefs on pain of punishment.

But the real killer punch that could yet end Obamacare is yet to be delivered. When I was in Washington, D.C., at the time when this shoddy piece of legislation was passed, I pointed out to all who would listen that as far as I could see the Act had originated in the wrong House, by a frankly dishonest device by which a bill number originally allocated to a harmless act about the Department of Veterans Affairs had been furtively reallocated to the Unaffordable "Care" Act.

I cannot now remember who had first pointed out this breach of the Constitution to me. Subsequently, however, the Supreme Court ruled that the Act created not a penalty but, in effect, a tax. And that ruling may yet seal the doom of the legislation.

For among the many challengers to the constitutionality of the Act are the Little Sisters of the Poor, who argue - again on religious grounds - that they ought not to be brought within its scope. And they are attacking the constitutionality of the Act on the ground that it was never validly passed, because its introduction not in the House but in the Senate offended against the origination clause in the Constitution.

So this is a good week for Americans great and very small. As you celebrate your great nation's birth, spare a thought for all those citizens who might have had their own birth but for Roe v. Wade and the pro-death lobby.

Pray for the Little Sisters of the Poor that their constitutional case may succeed. That would require the king to pay back $800 billion in ill-gotten taxes.

Finally, call in to hear my rousing valedictorian speech at the Heartland Climate Conference in Las Vegas next week (I shall be writing from there), and then come to hear my even more rousing speech in celebration of liberty at FreedomFest, also in Las Vegas a few days later. Let freedom ring, so that even the littlest of the little ones shall not perish from the earth!