This morning a son sent a text message with a quote from a U.S. Marine Corps march cadence. I knew that he was grinning as he composed and sent it. On reading, I grinned too.

"Just wanted to remind you of your connections with the military."

Three of these were buried at Arlington National Cemetery.

These eyes mist up when I hear "Battle Hymn of the Republic", or any part of it. 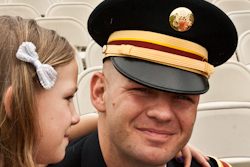 I met and photographed a remarkable young man.

His mother explained, "He is the youngest of my three sons.

He was deployed in both Afghanistan and Iraq, and had his

vehicle bombed out from under him."

She was glowing as she continued,

"Yesterday he was pinned with his Lieutenant's insignia. Today he graduates from Liberty University's School of Religion.

While living in the Virginia Tidewater area a while back, my trip to Norfolk one day included a visit to a place where the career and writings of General Douglas MacArthur are kept and memorialized. After their deaths, MacArthur and his wife, Jeanne, were entombed there. Since my Dad, Richard C. Lindsay, (Lt. Gen. USAF, dec.) had personally known and worked with MacArthur in Tokyo after WWII, my interest was not only historic, but personal as well.

I was thirteen years-of-age when our family arrived in Tokyo. These eyes saw this large city destroyed - flattened by the fire-bombing which had preceded the Japanese surrender. The only  family shelters were of cardboard, and of scrap metal. The only buildings left standing were the imperial palace and the surrounding government buildings - the necessary infrastructure for the physical re-creation of Japan as a nation.

Humane love and concern for the Japanese people would come through the souls of those who had conquered them. American examples were adapted to the Japanese historical mindset at the beginning. Then as Emperor Hirohito and other Japanese leaders came to recognize MacArthur's respectful kindness and wisdom, they were more willing to accept the mandated changes in their society.

A recent re-viewing of the MacArthur film, with Gregory Peck's portrayal of the General, helped to crystalize this commentator's understanding of the man's character and his place in the history of the USA, of Japan, and of the world-at-large.

Great men and women of history are not perfect examples of Father God's human creation, for we all inherit the rebellious nature of Adam and Eve - but their greatness lies in humble obedience to God's calling for their lives. Somewhere along the way, usually in childhood or youth, these remarkable souls have grace to submit themselves to the divine plan. Then God's blessing is placed in and upon them. Family example and training are major influences for good.

President Harry S. Truman had a different view of MacArthur.

The following is taken from the Truman Museum website:

In 1951, President Truman and his advisors were preparing to engage North Korea and China in peace negotiations, in an attempt to resolve the ongoing conflict. General Douglas MacArthur, the commander of the U.N. forces in Korea, issued an unauthorized statement containing a veiled threat to expand the war into China if the Communist side refused to come to terms. When MacArthur continued to support an expansion of the war, communicating directly with a like-minded Republican congressman, Truman, with the backing of the Joint Chiefs of Staff, as well as the Secretaries of State and Defense, felt they had no alternative but to replace MacArthur with a military commander who would act in concert with the administrations foreign policy. On April 11, 1951, President Truman relieved MacArthur of his command.

Richard H. Rovere and Arthur M. Schlesinger, Jr., however, in their contemporary account of the MacArthur dismissal, questioned MacArthur's Korean policy, noting General Omar Bradley's belief that, "it would have involved us in the wrong war in the wrong place at the wrong time against the wrong enemy." Further, they stated that it would have, "wrecked our global strategy in the hope of achieving a magnificent success in a local engagement," whereas then current American foreign policy recognized, "as MacArthur did not, that time is on our side, and sought in Korea to play for time - time to mobilize, time to rearm ourselves and our allies, time to bring into production new weapons and equipment and test their use, time for Europe to recover and rearm, time to build an ever-widening circle of allies and friendly neutrals, time for discontent to ferment within the sphere of Soviet power." (The General and The President and the Future of American Foreign Policy, 1951, p 244).

Later historians, such as Robert Smith, contend that, "[c]rudely, deliberately, with complete understanding of what would ensue, MacArthur undertook to sabotage Trumans effort, in March 1951, to open peace negotiations with the Chinese  (and that) no one not blinded by hero worship could overlook the arrogance and contempt with which MacArthur deliberately flouted Truman's directive." (MacArthur in Korea, 1982, p 155).

Truman's mistake, according to Rovere and Schlesinger, was not the dismissal of MacArthur, but rather was, "a failure in political education.  He [Truman] made all the necessary decisions with great and simple courage; but he  lacked the gift of illuminating them so that the people as a whole could understand their necessity." (ps 248-249).

We close our Memorial Day, 2014 recollections with excerpts from Douglas MacArthur's last public appearances before his retirement.

General of the Army, Douglas MacArthur

Final message to the West Point Corps of Cadets:

"Duty, Honor, Country. Those three hallowed words reverently dictate what you ought to be, what you can be, and what you will be. They are your rallying points. They give you a temper of the will, a quality of the imagination, a vigor of the emotions, a freshness of the deep springs of life, a temperamental predominance of courage over timidity, an appetite for adventure over love of ease.

"In this way, they will teach you to be an officer and a gentlemen. From your ranks come the great captains who will hold the nation's destiny in their hands the moment the war tocsin sounds. The Long Gray Line has never failed us. Were you to do so, a million ghosts in olive drab, in brown khaki, in blue and gray, would rise from their white crosses thundering those magic words: 'Duty, Honor, Country.'

"This does not mean that you are warmongers. On the contrary, the soldier, above all other people, prays for peace, for he must suffer and bear the deepest wounds and scars of war. But always in our minds ring the ominous words of Plato: 'Only the dead have seen the end of war.' ....The shadows are lengthening for me. The twilight is here. My days of old have vanished in tone and tint. They have gone glimmering through the dreams of things that were. Their memory is one of wondrous beauty, watered by tears, and coaxed and caressed by the smiles of yesterday.

"I listen vainly, but with thirsty ear, for the witching melody of faint bugles blowing reveille, of far drums beating the long roll.  In my dreams I hear the crash of guns, the rattle of musketry, the strange, mournful mutter of the battlefield. But, in the evening of my memory, always I return to West Point. Always there echoes and re-echoes: 'Duty, Honor, Country.' Today marks my final roll call with you. I want you to know that when I 'cross the river', my last conscious thoughts will be of The Corps, and The Corps, and The Corps. I bid you farewell."

. . ."But, once war has been forced upon us, there is no other alternative than to apply every available means to bring it to a swift end. War's very object is victory, not prolonged indecision. In war, there can be no substitute for victory. For history teaches us with unmistakable emphasis that appeasement but begets new and bloodier war. Like blackmail, it lays the basis for new and increasingly greater demands until, as in blackmail, violence becomes the only alternative.

"'Why?' 'Why,' my soldiers asked of me, 'surrender military advantages to an enemy in the field?' I could not answer. The magnificence of the courage and fortitude of the Korean people defies description. They have chosen to risk death rather than slavery. Their last words to me were: 'Don't scuttle the Pacific.' "I am closing my 52 years of military service. When I joined the Army, even before the turn of the century, it was the fulfillment of all of my boyish hopes and dreams. The world has turned over many times since I took the oath on the plain at West Point, and the hopes and dreams have long since vanished. But I still remember the refrain of one of the most popular barrack ballads of that day which proclaimed most proudly that 'old soldiers never die, they just fade away.' Like the old soldier of that ballad, I now close my military career and just fade away, an old soldier who tried to do his duty as God gave him the light to see that duty. Goodbye."