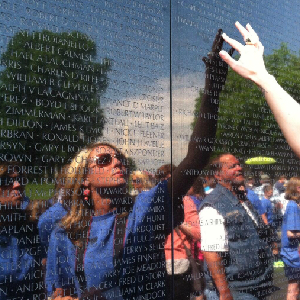 Teacher, Crystal Feldner at 'The Wall"

Crystal Feldner touches her grandfather's name on the Vietnam Veterans Memorial. Feldner was among a group of teachers leading a field trip to Washington, D.C. It was her first visit to the wall.

Today is a day the Nation has set aside to remember those Americans who were lost on battlefields around the globe. Some were lost fighting for American freedoms and to preserve liberty; many more were lost fighting needless wars for the benefit of the elites. Regardless, the loss of those military members is equally painful to their family members, who must continue on despite the loss.

Longtime readers know that I oppose the expanding American empire and wars of aggression, including the expansion of the war on terror into countries that have not attacked the U.S. and pose no threat to do so. But I'm also mindful of the fact that many Americans have been convinced of the war's necessity. Today is not the day to debate the merits of America's wars.

Memorial Day began in May 1865, when newly freed slaves in Charleston, S.C., exhumed the bodies of Union soldiers from a mass grave at the Washington Race Course (today the location of Hampton Park) and gave them individual graves.

The following year, and each year thereafter on May 5, a Decoration Day observance was held in Waterloo, N.Y. To commemorate the occasion, the graves of fallen soldiers were decorated with flags and flowers in cities and towns and battlefield graveyards across the nation.

In 1882, the alternative name of Memorial Day was used, though it did not become commonly used until Federal law declared the day in 1967. In 1968, the Uniform Holidays Bill set the date as the last Monday in May rather than the more traditional day of celebration, May 30.

Personal Liberty Digest is a site that promotes discussion from all sides of the spectrum on a variety of topics. Unfortunately, some of the discussions devolve from rational debate to name-calling exercises in futility.

Let's set aside our partisan ideas and ideologies today and recognize those who have fallen. If not for fate and circumstance, I might have been one of them. Remember, too, their families.

And don't forget that we currently have members of the U.S. military fighting and dying in Afghanistan, patrolling the seas, standing at attention on the Korean Peninsula and guarding our embassies around the world. There are others stationed at nearly 1,000 bases around the world representing America's interests.

Regardless of whether you support the wars in those places, the wars fought previously or the policies that require us to have troops stationed around the world, we must leave politics aside this day and remember those who chose to go where their Commander in Chief sent them and who did all they could to see their mission through.

Many Americans receive the day off, and it's not unusual for them to spend the day at picnics, barbecues, the lake or the beach. As you enjoy this holiday, don't forget the reason behind it.

Remember those who fell on the battlefields at Lexington, Concord and Valley Forge; at Ft. Meigs, Ft. George and Baltimore; at El Paso, Cerra Gordo and Mexico City; at Bull Run, Fredericksburg, Gettysburg, the Wilderness and outside Atlanta and Richmond; at San Juan Hill, Santiago de Cuba and Silva Heights; at Rheims, the Marne and Argonne; at Pearl Harbor, North Africa, Normandy, Guadalcanal, Ardennes and Midway; at Inchon, Chosin and Seoul; at Saigon, Hue, Hamburger Hill and An Loc; at Kuwait City, and Southern Iraq; at Mazar-e-sharif, southeastern Afghanistan,

Qandahar, Marjah and Pashmul; at Nasiriya, Baghdad and Al-Anbar; and all the battlefields in between.

Last year, a reader provided a list of European cemeteries that hold the remains of American servicemen. Here they are, in alphabetical order, along with the number of Americans buried there: