Joe Kovacs is an award-winning journalist and, since 1999, executive news editor of WND. He is the author of two best-selling books: "Shocked by the Bible: The Most Astonishing Facts You've Never Been Told" and its 2012 sequel, "The Divine Secret: The Awesome and Untold Truth About Your Phenomenal Destiny."

"Easter" is such a pretty-sounding word, isn't it?

It also brings to mind for countless millions the resurrection of Jesus Christ from the grave.

They say this is the holiest time of the year, because yes, the Creator of the universe, Jesus Christ, is alive on His heavenly throne after spending three days and three nights completely dead.

I could not agree more with people becoming aware of the story of Jesus' death and return to life. It shows us the path to becoming born into the actual Family of God, as the Bible indicates many sons and daughters will be brought to glory as the immortal "children of God."

(But brace yourself, because there's a very dark side to this centuries-old tradition, and it has to do with the famous Ten Commandments of God.

The very first commandment of the Big Ten is perhaps one of the most overlooked in everyday life.

In just eight words, it states: "Thou shalt have no other gods before me." (Exodus 20:3)

Sounds simple enough. Christians would never put another god in front of the true God who made the universe - right?

Most Christians, whether knowingly or unknowingly, violate this very first commandment of God each year by placing before God the actual name of a pagan goddess of fertility and the dawn.

In case you haven't figured it out by now, her name is - believe it or not - "Easter."

That's correct, folks. The word Easter is actually the name of an ancient, heathen goddess who represents fertility, springtime and the dawn.

Find out the biblical truth about Easter as well as the days Jesus REALLY died and rose from the grave in the autographed besteller, "Shocked by the Bible," or get "Shocked by the Bible" bundled with Joe Kovacs' brand-new bestseller about your spectacular destiny, "The Divine Secret."

Some of her symbols are flowers, bunnies, eggs, the sun and the moon. Who'da thunk?

If you don't believe me, go ahead and Google it. Or simply open up

an encyclopedia or a dictionary to probe the pagan origins.

Feel free to ask your preacher.

An honest one will have to admit it. 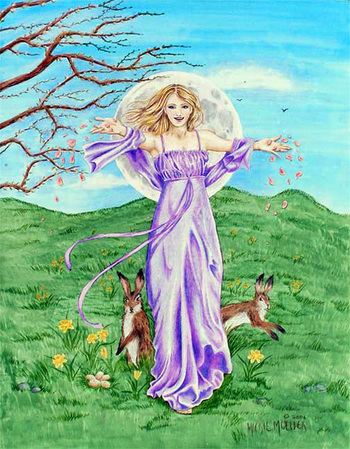 In different languages and through a variety of cultures, the name of this deity - who in reality does not even exist - is spelled different ways, including Ishtar, Astarte, Ostara, Eostre and Eastre.

Even in the Bible itself, many of God's own chosen people actually followed the customs of numerous Easter goddesses, with her name spelled in the King James Bible as "Ashtaroth" and "Ashtoreth."

For those who have never seen Easter in this light before, take a look at what Scripture itself has to say. I'm adding emphasis with the modern word in parentheses so you can see what God is really telling you:

While Easter may sound like a pretty word, just look again in that list above at some of the terms God associates with Easter and her customs: "corruption," "sin," "abomination" and "evil."

Many Christians remain unaware that Easter is actually a pagan goddess known by a variety of other names including Ostara, often depicted with her springtime fertility symbols such as flowers, the sun, rabbits and decorated eggs.

And here's a Bible newsflash for you. We're not even supposed to be saying the E-word.

Crack open your own Bible and read it for yourself:

Certainly, Christians today who celebrate Easter don't do so with the intention of worshipping another god besides the true God, and I'm not saying or even implying that. But the fact of the matter is many are bringing the name of a pagan, nonexistent goddess before Him, violating the very first commandment.

Additionally, it's more than just the name that bothers God.         He specifically warned His people not to worship Him using heathen customs:

Perhaps if the springtime holiday were called "Hitler Sunday" or even "Satan Sunday" instead of Easter Sunday, people might have an easier time understanding the problem of attaching evil to God. Would people decorate swastikas instead of eggs and hold goose-stepping contests, all the while claiming such customs were now Christianized?

For those who might wonder why the King James Bible mentions Easter in Acts 12:4, keep in mind the Bible was not initially written in English. The word in its original language of Greek is "Pascha," meaning "Passover" and translated as Passover in every other instance, some 28 times. Bibles published since 1611 have corrected this glaring error.

Ladies and gentlemen, it's way past time to dump all this fertility-goddess nonsense when it comes to honoring the true Creator.

Enough with the name of Easter, the coloring of eggs, the Easter egg hunts, baby bunnies and fluffy little chicks. These are all symbols of reproduction which have been associated with the heathen fertility goddess for millennia now.

The apostles did not find a basket of eggs or a chocolate bunny rabbit in Jesus' empty tomb, and they certainly didn't go Easter-egg-hunting while spreading the good news of the kingdom of God.

The maker of all things, Jesus Christ, is offering all of us a spectacular, glorious future as an immortal child of God who will be judging angels and the citizens of the world, reigning alongside Him for eternity.

God not only wants to be worshipped in spirit and in truth, but He wants absolutely nothing to do with this phony baloney goddess.

Is it really worth offending your Maker for the pretty-sounding, colorful lie of the nonexistent, evil chick called Easter?