THE MOST POWERFUL WOMAN IN AMERICA

Suppose you were a committed leftist revolutionary who somehow got elected president of center-right America.

Suppose you were great at making speeches, but little else.    You masked your socialist agenda in the appealing rhetoric of fairness and justice, but secretly loathed the American system of constitutional government and free-market capitalism.

Suppose you were also an extreme narcissist with an absurdly grandiose view of yourself and almost no tolerance for criticism and disagreement. Your ego so fragile, your worldview so distorted, your mind so angry beneath your charismatic exterior, and your self-image of being a divinely gifted leader in danger of disintegrating in the light and heat of mounting geopolitical turmoil and your own stunning failures as president.

In short, suppose you were Barack Obama.

To "stay the course" you were on - of trampling the Constitution and forcing socialism on an unwilling America, despite plummeting disapproval and deafening calls for you to stop - you would need help. A very special and secret kind of help.

You would need Valerie Jarrett. 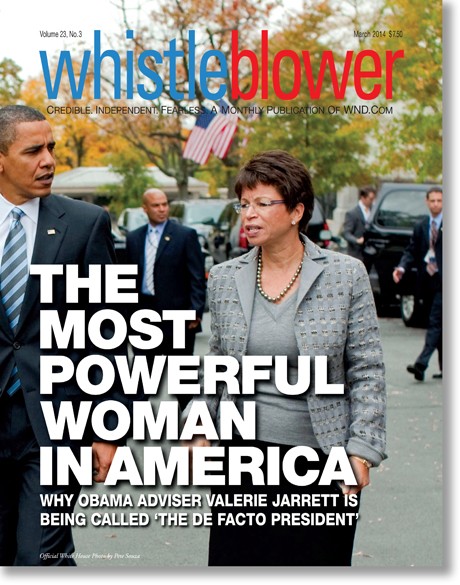 The March 2014 issue of WND's acclaimed Whistleblower magazine, titled "THE MOST POWERFUL WOMAN IN AMERICA," tells the utterly astonishing story of the little-known woman in the White House the New York Times Magazine's former editor-in-chief calls "in many ways the de facto president."

Highlights of "THE MOST POWERFUL WOMAN IN AMERICA" include:

"For those who thought they understood Obama, his agenda and his modus operandi," said Whistleblower Editor David Kupelian, "all I can say is: Read 'THE MOST POWERFUL WOMAN IN AMERICA' and your eyes shall be opened."