NEXT PRESIDENT OF THE U.S.?

Dr. Benjamin Carson, the retired neurosurgeon whom many are urging to run for president in 2016, gave a remarkable interview to WND columnist and radio talker Bob Just recently, who was filling in as guest-host on the top-rated "Sean Hannity Show."

With more than 500 affiliates nationwide, Hannity's radio show, second only to that of Rush Limbaugh, is heard by roughly 13.5 million loyal listeners each week. 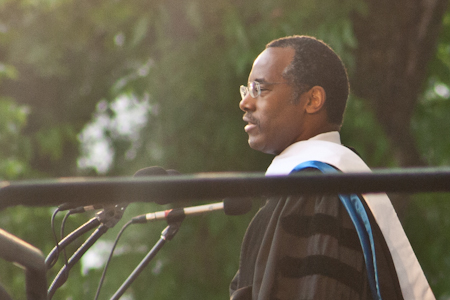 Carson, who retired recently as director of pediatric neurosurgery at Johns Hopkins Hospital, became a household name for "speaking truth to power" when he delivered the keynote speech at the National Prayer Breakfast last February and, with President Obama sitting a few feet away, proceeded to brilliantly critique the Obama administration's deficit spending, health-care takeover and more.

In October, Carson told The Hill, "[Running for president] is not something I have any desire to do whatsoever," adding "but I certainly listen."

He continued, "If the circumstances were to evolve in such a way that that seemed to be what God was calling me to do, I would certainly do it. And I would never turn my back on my fellow citizens, if there was a hue and cry for such."

But on the Hannity show, Just turned aside from all the usual political questions Carson is asked, to get the famed surgeon and possible presidential contender to talk about the person who put him on the path to success - his desperately poor mother.

Read the story about Ben Carson in "Gifted Hands," see what he believes needs to happen to restore America's greatness in "America the Beautiful," and listen to his challenge to have a great adventure in life, in "Take the Risk."

"She was one of 24 children and got married when she was 13 in a desperate attempt to escape the horrible environment in rural Tennessee," said Carson. "And she and my father moved to Detroit. He was a factory worker and then she discovered some years later he was a bigamist. So there she was by herself again, trying to raise two young sons in the inner city."

However, as Carson explained, his mother had one saving grace:

"But the interesting thing about her was, she was never a victim. She never felt sorry for herself, she never made excuses, and that was a good thing.

"The problem was, she didn't accept excuses from us either (laughter), and that was a problem for us! So we had to learn pretty early on, just forget about making excuses cause it's just not gonna work. ...

"More importantly, we were both poor students, and she was observant, and she noticed in the homes that she cleaned - these were wealthy people - that they didn't sit around watching TV all day. They did a lot of reading, studying and figuring things out. So she determined that that's the life we were going to have.

"We were extremely unhappy ... but it didn't matter, we had to do it.

"Interestingly enough, after a while, as I began to read those books, particularly about people of accomplishment, I began to notice something. And that is that the person who has the most to do with what happens to you in life is you. Nobody else gets to determine that except you. And that was an incredible revelation for me and for my brother both. And we realized our terrible situation did not have to continue. We had the power to change it."

But wait, asked Just: "She had a tough childhood. ... How did she overcome that? Where did she find her authority to love you and discipline you the way she did, as a struggling single mom?"

Said Carson: "She found it in God. She became a believer, and a very strong believer ..."

And that's just the beginning. To find out more about how Dr. Ben Carson got started on the path to a remarkable life, listen to Bob Just's entire interview here:

Carson, winner of the Presidential Medal of Freedom and founder of the Carson Scholar's Fund, is the author of five bestselling books, including "Gifted Hands: The Ben Carson Story," "Take the Risk: Learning to Identify, Choose and Live With Acceptable Risk," and his latest, "America the Beautiful: Rediscovering What Made the Nation Great."

Bob Just, in addition to being a veteran radio talker and WND columnist is founder and president of several organizations, including Concerned Fathers Against Crime, Concerned Mothers Alliance for Children, and Concerned Youth. He worked with Sean Hannity on the research and development of Hannity's New York Times bestselling book, "Deliver us from Evil." His television appearances include Fox News' "Hannity," ABC's "Politically Incorrect," "Hannity & Colmes," "Fox & Friends" and "The Coral Ridge Hour."

'I don't want to offend anyone'

At the National Prayer Breakfast last February, broadcast live on C-SPAN2, Carson said at the outset that he didn't want to "offend" anyone. Yet his words nonetheless made at least one distinguished guest in attendance - President Barack Obama - squirm in his seat.

For instance, taking on class-warfare economics by advocating for a 10 percent flat tax, Carson said a person who earns $10 billion should pay $1 billion in tax, while one earning $10 will pay $1 in tax.

"We don't need to hurt him," Carson continued. "It's that kind of thinking that has resulted in 602 banks in the Cayman Islands. That money needs to be back here, building our infrastructure and creating jobs."

Carson further took aim at the swelling national debt, increasing bureaucracy and political correctness, which he called "dangerous" because it "muzzles" people and "keeps people from discussing important issues while the fabric of their society is being changed."

But it was Carson's proposal for health-care reform - an approach completely antithetical to the president's massive and disastrous health-care overhaul program - that likely rankled Obama the most.

"Here's my solution," Dr. Carson said of America's health-care woes. "When a person is born, give him a birth certificate, an electronic medical record and a health savings account [or HSA] to which money can be contributed - pretax - from the time you're born 'til the time you die. When you die, you can pass it on to your family members, so that when you're 85 years old and you got six diseases, you're not trying to spend up everything. You're happy to pass it on, and there's nobody talking about death panels.

"And also, for the people who were indigent who don't have any money," Carson continued, "we can make contributions to their HSA each month, because we already have this huge pot of money. Instead of sending it to some bureaucracy, let's put it in their HSAs. Now they have some control over their own health care."

"Dr. Carson said the one thing that Obama and the Democrats do not want to hear," Rush Limbaugh later commented. "In this case, we have an ideal replacement for Obamacare that is much better, that promotes the health-care industry, that promotes cost savings, that promotes competition and it gets everybody covered."