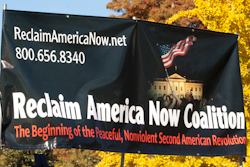 Yes, Mr. Jefferson, we have reached that point. 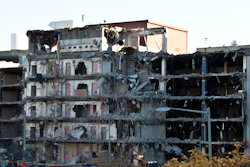 Even as this building is demolished, and leveled -
removing the useless rubble
from the scene, so we now must remove
from America the rubble created by those who
hate God and His Word.
We do not want to shed blood - And we know
we must tear down and root out the evils that
now plague our American nation.
So we begin with heavy, yet hopeful hearts,
committing ourselves to Our Creator,
and to His dream of Liberty for His people,
created to be a shining light to the nations.
On this day we begin again, just as our forefathers did.
Thank you for the words you penned in 1776, Mr. Jefferson.
This then, is our new, our Second Declaration of Independence. 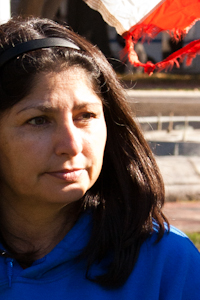 Preamble to Declaration
of Independence
"We hold these truths to be
self-evident,
that all men are created equal -
that they are endowed
by their Creator with
certain unalienable rights,
that among these
are Life, Liberty,
and the
Pursuit of Happiness "
"That to secure these rights, Governments are instituted among Men, deriving their just powers from the consent of the governed, That whenever any Form of Government becomes destructive of these ends, it is the Right of the People to alter or abolish it, and to institute new Government, laying its foundation on such principles, and organizing its powers in such form, as to them shall seem most likely to effect their Safety and Happiness.

Prudence, indeed, will dictate that Governments long established should not be changed for light and transient causes; and accordingly all experience hath shewn, that mankind are more disposed to suffer, while evils are sufferable, than to right themselves by abolishing the forms to which they are accustomed. But when a long train of abuses and usurpations, pursuing invariably the same Object, evinces a design to reduce them under absolute Despotism, it is their right, it is their duty, to throw off such Government, and to provide new Guards for their future security."
We remember the inspired
words of Abraham Lincoln,
written and spoken 150 years ago
at Gettysburg, Pennsylvania.
There he honored the thousands
who had given their lives -
both the blue and the gray.
There Lincoln said,

" . . . But, in a larger sense, we can not dedicate -- we can not consecrate -- we can not hallow -- this ground. The brave men, living and dead, who struggled here, have consecrated it, far above our poor power to add or detract. The world will little note, nor long remember what we say here, but it can never forget what they did here. It is for us the living, rather, to be dedicated here to the unfinished work which they who fought here have thus far so nobly advanced. It is rather for us to be here dedicated to the great task remaining before us -- that from these honored dead we take increased devotion to that cause for which they gave the last full measure of devotion -- that we here highly resolve that these dead shall not have died in vain -- that this nation, under God, shall have a new birth of freedom -- and that government of the people, by the people, for the people, shall not perish from the earth." 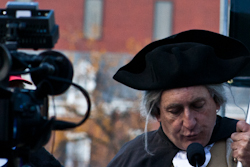 Geo. Washington came, reading the
2nd Declaration of Independence
for those assembled and for the
documenting video camera.
The list of wrongs perpetrated by the
English king, George III
was deleted, then replaced by the wrongs
done by the present
administration under
Barack Hussein Obama. 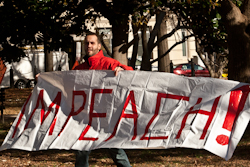 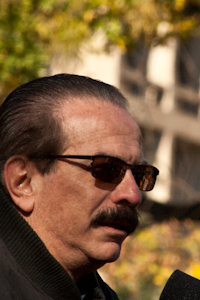 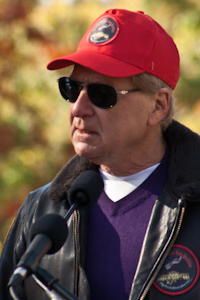 Standing as
brothers-in-arms
in the fight to
Reclaim America Now. 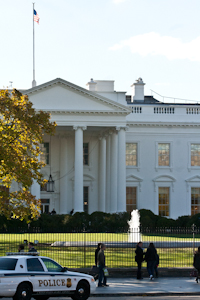 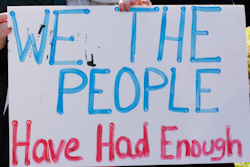