Actions they lead to

Light creates transparency. The more light, the more transparent a human being will be. Truth carries light within it.

He who said, "I am the way, the truth and the life" is the same One who is "the light of the world".

Yes, your motives . . . my motives . . . and the motives of everyone else on this Earth -- not only of those living today, but every person who has ever lived.

This includes kings, queens, politicians, celebrities and sports figures. It includes our family members, our neighbors, our pastors and church families . . . and it includes those who have decided to be our enemies. EVERYBODY !

Do you wish to have power over another person, over a governmental structure, over the outcome of even one other life?

If we desire this, we join the ranks of manipulators who study the plans of sales achievers, the political operatives, those who practice witchcraft and sorcery. Then we may study the writer from renaissance Italy who inspired so many of those who exercise power over those of lesser social and political station. 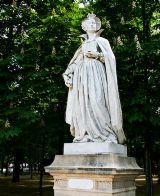 There once lived a woman named Maria, who had a pope for an uncle. Born and brought up to wealth and privilege, she was married to a young french prince who became king. Not only was she queen, she was also regent for three of her young sons who in their turn, became kings of France as well. The author whose book instructed her in statecraft was named Machiavelli. His book was entitled, "The Prince."

Eventually as queen of France, Maria was allied with the Prime Minister, Cardinal Richelieu, in the long and murderous persecution of the Huguenots - the French protestant believers.

You may have heard the name of Maria's birth-family. It was

di Medici. An online search of this name reveals a very interesting family history, and the reputation of some of the family members. Accepting an invitation to dine with them, meant risking one's life, as poisoning rivals was a family tactic.

So . . . if the pope is a relative, Signor di Medici, . . . you've got a friend who can make your thievery and murders go away, right?

Whether you are wealthy, comfortable, poor or a slave . . .

Whether you are educated with the knowledge of men, or not . . .

Whether you are a janitor, congressman, senator or president . . .

Whether you are a corporate exec, billionaire, bishop or pope . . .

You are only a man or a woman, and you will answer to GOD.

You and I will wither away like the grass in the field,

But the WORD of the LORD will stand forever!

"Turn to Me and be saved,

all the ends of the earth;
For I am God, and there is no other.

"I have sworn by Myself,
The word has gone forth from My mouth in righteousness
And will not turn back,

That to Me every knee will bow,

every tongue will swear allegiance.

"They will say of Me, 'Only in the Lord

are righteousness and strength.'
Men will come to Him,
And all who were angry at Him will be put to shame."