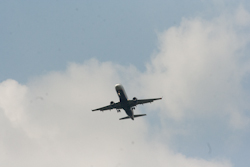 The Love Affair with

For this writer, the love affair with flight goes back to childhood -- not hard to understand, as Dad was a pilot. He was still in college at the University of Minnesota when Charles A. Lindbergh planned, guided the design, raised the finances, and flew the 'Spirit of St. Lewis' from New York to Paris in 1927. It was the first successful solo trans-Atlantic flight. 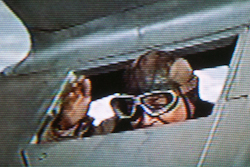 Jimmy Stewart as Lindbergh, waving to fishermen off Irish coast.

When the economic collapse known as the 'Wall Street Crash of 1929' occurred, Dad made his decision. He had been a boy scout. He had been Colonel of the Reserve Officer Training Corps at the University. He needed financial security. The choice was easy, and he enlisted in the U.S. Army without a four-year degree, but with impressive credentials anyway.

After basic training, and a stint at cook and bakers' school, (we inherited a cookbook from that era, featuring a comedic recipe for preparing an elephant!) Dad proceeded to flight training. So began his 32-year-long path in military aviation and in diplomacy. Because of his communication skills, experience in silent film production and research ability, his career eventually encompassed staff planning and intelligence work for General Eisenhower in Europe. Then on to the Pacific to aid General MacArthur. Somewhere along the way he assisted with the liaison work for the planning and establishing of NATO. Needless to say, the family did not see much of Dad for several years.

After the military authorities felt it was safe enough to do so, some leaders abroad brought their families to share their life in unusual places. That's how our family reached Okinawa in 1946 after a trip by automobile from Washington, D. C. to San Francisco, California, with stops along the way to visit relatives and do some sight-seeing. Dad had written to Mom that she was to plan, purchase, and ship everything the family would need for one year - a logistics triumph!

We embarked from Fort Mason on a troopship, spent two weeks on the waves of the Pacific Ocean, and arrived eager to get back our 'land legs' and be able to eat without dreading sea-sickness.

The military medical people decreed: DON'T EAT THE LOCAL PRODUCE. (Human excrement was commonly used as a fertilizer.) Our food came out of cans. Bread came from the bakery at Naha (complete with baked-in bugs).

One night I awoke to see a large rat lurking at the other end of my pillow. An orderly dispatched him with a broom, while I backed into a corner of my quonset-hut bedroom.

Another day my Dad was scheduled for mandated flight time in a small plane, to keep up his pilot certification. He invited me to come along. Up over the Japan Sea, Dad turned over the flight controls to me for one-half an hour.

What  a landmark event in my up-til-then thirteen years of life!

After only six months on Okinawa, the family joined Dad when he was transferred to Tokyo for duty on MacArthur's staff. Then again after six months, it was a flight back to the U.S. by way of Guam (where we experienced a never-to-be-forgotten sunset). When we reached Hawaii and my Mom asked me what I wanted to eat - I quickly answered, "A BLT!" The mere thought of good bread, mayonaise, and FRESH tomato and lettuce with bacon, had me pretty excited!

Living in NW Washington, D.C., I got back into the American school system, with intermediate and high schools, and prepared for college.

During the Christmas break of my freshman year, Dad booked the family on a commercial flight to Florida and Cuba. The Castros had not yet taken over.

Flying in the other direction several years later I was part of a USO troop which flew to Hudson Bay to entertain troops.

Unusual things can happen to you if your father is a visionary.

Dad was C.O. of Sampson AFB, basic training center in upstate New York in 1952 and 1953. Dad was aware of the approaching 50th anniversary of the Wright Brothers' first powered flight at Kitty Hawk, North Carolina. He also became aware of a recent basic training graduate, a frenchman who had survived life in Nazi-occupied France, come to the U.S., and been educated in classical music. In fact, when Serge de Gastyne entered the US Air Force, he was nearing completion of his master's degree at the Eastman Rochester School of Music.

When the talented composer (then a private in the USAF), met the CO's daughter and the musical/literary fire was kindled, Dad asked us to write an historically accurate, musical piece to celebrate the occasion. We called it a docu-drama. It took a year to write book, words, and music, to identify the talents needed, and to enlist them. Dad gained support and assistance from the headquarters USAF Band and Symphony in Washington D.C. and their string section flew up to join the base band for the weekend performances of

CONQUEST OF THE AIR. (The producer, then an enlisted airman, later went on to produce Cabaret, Pippin, and 1776.)

Three soloists and a chorus, and audio and film footage enhanced the story of mankind's dream of flight and its history.

Again a few years later, the family, including my parents, flew from Washington, D.C. to Cincinnati, Ohio for a symphonic concert weekend and the first performances of a new work by my husband. We had a bit of trouble when one of the engines caught fire. It was clearly visible to me (for some reason, my plane seats are frequently just behind the wing). On that trip, we met and spoke with the great piano virtuoso, Artur Rubinstein.

Rubinstein loved to tell stories. His autobiography is full of them, and they are life-lessons. When a talented person is also full of charm, they can advance their career and slide along the path to success for a while. Then at some point, their superficial exterior meets the rocky truth . . . that their success is not really built upon mastery of the art which they have chosen to pursue. Rubinstein reached that point in his life when he met and married the daughter of the conductor, Arturo Toscannini. The pianist was 40 years old, but had not been truly dedicated to improving his technical ability on the piano.

It was just too easy to "play around". Audiences loved him as the charming playboy of the concert stage. At last, it was time to grow up. The weekend that we met the maestro, it was clear that Rubinstein had indeed become a true artist, and was faithful to practice. He was then 72 years old. As a man of European culture however, he would still kiss the hand of a lady.

Later, with my first two children, I took ship then plane to visit my parents in Naples, Italy, where Dad was then stationed. We spent several days in Paris. That nation was in political turmoil (not unusual) before Charles de Gaulle was called to assume the office of President of France. The children and I returned to the U.S. by plane.

Within a year we flew to Houston, Texas, where the Houston Symphony Orchestra did first performances of another de Gastyne musical work. The conductor there was Leopold Stokowski, who had commissioned an original work. Stokowski had seen a copy of the deGastyne score for L'Ile Lumiere on a desk at the New York office of ASCAP (American Society of Composers, Authors and Publishers). Looking through the score, Stokowski liked what he saw, and made efforts to contact the composer. So a year later, the commission for an original composition had been completed, the Houston Symphony was rehearsing it, and our little family traveled to Houston for the premiere performances.

Music composition is a demanding discipline as well as an art.

It is hard work, and the composer has many pitfalls to overcome if he or she is to succeed in their chosen path.

The foundation, or 'groundwork' required is extensive. The hard work is done 'on the ground' by way of discipline and persistence . . . but then comes the flight training . . . and along the way, the liberating, the soaring into the clouds beyond the earthbound existence! This happens in music, because, as God has revealed,

"Music is the bridge between the soul and the spirit."

To bring today's remembering to a close, we share an inspired writing by a young American, John Magee Jr., who flew for the Canadian Air Force in England during WWII. He did not live long after writing it, but his legacy will live on.

Oh, I have slipped the surly bonds of earth,

And danced the skies on laughter-silvered wings;

Of sun-split clouds - and done a thousand things

You have not dreamed of - wheeled and soared and swung

High in the sunlit silence. Hovering there,

I've chased the shouting wind along and flung

My eager craft through footless halls of air,

Up, up the long delirious burning blue

Where never lark, or even eagle, flew;

And, while with silent, lifting mind I've trod

The high untrespassed sanctity of space,

Put out my hand, and touched the face of god.