"Wall of water" flattens out in Boulder

A "wall of water," predicted by the National Weather Service flattened out early Friday morning.

But the flash flood warning for Boulder County continues until 6 a.m. and more rain is expected during the night.

Separately, the NWS has also issued a flood emergency for the Big Thompson Canyon and the town of Loveland, as rain continued to fall there as well. NOAA reported that the Big Thompson River at Drake is more than 4 feet above its flood stage of 6 feet.

Larimer County officials, including Sheriff Justin Smith, warned residents of the Big Thompson Canyon on Twitter and other social media to seek higher ground and the weather service extended the flash flood warning until 8 a.m.

Cenobio Chacon tries to get his son's car out of the path of the flood outside his home in north Boulder, September 12, 2013. The car was stuck in the middle of Topaz Drive. (RJ Sangosti, The Denver Post) the floodwaters will continue to rise until sunrise. At 10.55 feet, the Big Thompson was running higher than it did during its deadly flood in 1976 - 9.3 feet.

Meanwhile, Fort Collins city officials closed bridges after a late-night surge on the Poudre River, after water began topping Seaman Reservoir in the Poudre Canyon. The city warned residents to stay clear of the river.

In Boulder, officials announced before midnight that they were tracking a large "wall of water, containing debris and vehicles," as it made its way down Emerson Gulch from the Fourmile burn area .

Gabi Boerkircher, a Boulder spokeswoman, said a drainage gulch at the edge of the Four Mile burn scar that was holding a large amount of water has burst, and released a 30-foot wall of water carrying debris including vehicles.

At 12:30 a.m. Boerkircher said the surge of water seemed to have flattened to between 6 and 7 feet deep. Shortly after that, spokeswoman Sarah Huntley told 7News that the flow in the creek had started to slow.

The surge of water knocked out area sensors monitoring the creek.

She said it is unknown if anybody has been trapped in that debris as it makes its way down to Boulder Canyon.

"We had evacuated an hour ago, so hopefully it had been cleared," Boerkircher said. 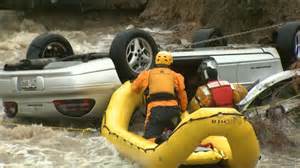 Sirens went off a little after 10 p.m. in Boulder. Residents from the mouth of Boulder Canyon to Broadway and between Pearl and Marine streets were told to move to higher ground immediately. City officials told the Daily Camera that that includes about 4,000 residents.

Another 4,000 residents in areas along the Boulder Creek corridor east of Broadway to 75th Street were told to shelter in place but move to upper floors, if possible.

The city of Boulder said in a statement that Boulder Creek was flowing at approximately 4,900 cubic feet per second; almost double the volume from earlier in the day. The statement said there are mudslides at the mouth of Boulder Canyon 400 feet long and 4 feet deep as the sides of the canyon give way due to the saturation from the days long rain.

The flash flood warning for Boulder and Jefferson counties was extended until 6 a.m.

Mitchell Byars and Erica Meltzer of The Daily Camera contrubuted to this report.