[transliterated to English from Scottish dialect]

Ranald Bain explains spiritual warfare against generational curses in regard to Alicia, whom Ranald had earlier rescued from the threat of deadly tragedy on the cliff overlooking a stormy sea: 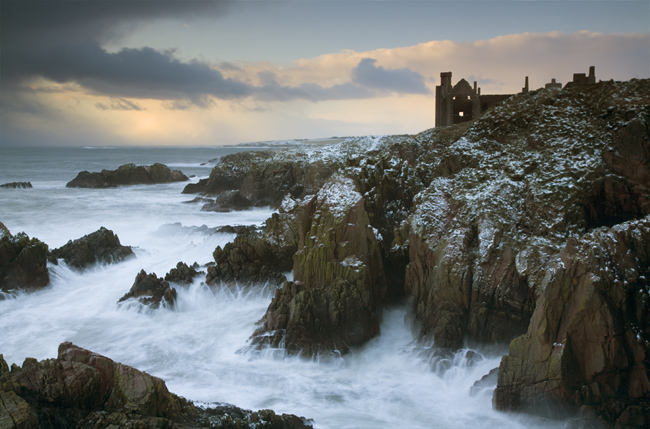 Chapter sixteen - Music and the Word

Through many dangers, toils and snares,

We have already come.

And grace will lead us home.

As I left Alicia's room I had to stop in the corridor in a positive gush of tears. The heavenly vision, and even the part in it my own music had played, was so breathtakingly wonderful, I could do nothing but weep in wonder.

Five minutes later, as I recovered my emotions, I was surprised to find Alasdair and Ranald in the sitting room before a blazing fire, engaged in earnest conversation. Ranald's hair was still a little wet, but otherwise he appeared comfortable and dry in a shirt, pair of trousers, and slippers I assumed to be Nicholls's, since I had never seen them before.

"How is the lassie?" Ranald asked, looking up as I walked in.

"She is warming up and sleeping comfortably," I replied, sitting down beside Alasdair. "She woke up and saw me and smiled and seems herself again. She has no memory of being at Findlater."

"The duke's been tellin' me more about Olivia and her incantations and such like as a lassie. The thing's more serious than I knew since it goes back thru the generations. We must be dealing with more entrenched strongholds than I knew. 'Tis serious business, that, when it gets into the generations."

"The generations?" I said slowly. "I'm not sure I understand what you mean."

"The root system of a family's past. None of us comes into life as an all together blank slate, you know. We are products of the generations that came before us, with all the traits and quirks and characteristics and spiritual sensitivities that have been bred into our family lines for both good and evil. Tendencies, you might call them. Proclivities to do and think and act in certain ways.

Scientists likely have scientific ways of explaining parts of it with genes and the like. But I would give even more credence to the spiritual tendencies our ancestors planted in the soil of our past.

That doesn't mean a body will follow those tendencies, because spiritually, in a manner of speaking, we are a blank slate with wills and temperaments and personalities of our own that we make choices with. No other man nor woman's responsible for those choices and what we make of that will and personality than just ourselves.

"But there's forces at work, too, urging now this way, pushing now in that direction, goading us here and there. Some of those forces and urgings are inducing and encouraging us toward the light; it may be from some grandmother or great-grandfather who spent his or her life on their knees praying for their posterity and infusing the line of the generations with truth and righteousness. The life of such a one feeds the soil of that family with ongoing nutrients of goodness that bears God's fruit for many generations after them. But there are other forces at work as well, unseen it may be, dark forces pushing and coaxing toward the evil one, whispering lies and 'selfishnesses', inflaming pride and arrogance and anger from another great-great-grandfather or 'mother who fed only the selfish side of their nature, or maybe he dabbled in the occult, or he may be a conduit, or open door into the generations for the working of some demon or another -- a demon of gluttony or avarice or greed or revenge or power or envy or complaint or mammon [love of money]. And each one of these forces from those that have come before, all mixed up and working together, are what I call the generations."

"You're not saying we can't help what we do?"

"No, no. We're given our own wills and lives and circumstances and temperaments and the particular soil of our own life's conditions to make the best of how we're made and what life brings our way, and through it all to follow the promptings toward righteousness, and to rebuke and oppose and resist with all the strength of our high natures whatever may urge us against it, and whatever may whisper to us to follow the lower path where self is king. Doesn't it give you a good feeling that some ancestor of yours may have prayed for you and asked the Spirit of the Lord to give you strength just when you need it?"

"So you really believe that a prayer prayed a hundred years ago, or even ten years ago, could be answered in my life . . . now . . . today?" I asked.

"Without a doubt! The arrows of prayer we launch upward into the regions of God's great heart are not bound by time. Prayers that may have gone into God's ear a hundred years since may be sent back to earth as his answers in your own lifetime just when you most sorely need them. My daddy's faithfulness and his daddy's before him, and my dear mum, who I can still see on her knees in my memory - I know they prayed hours and hours for me. Those prayers did not die out and become nothing just because they're no longer to be with him that made them. Those prayers are still in God's heart. And I believe he's always looking each day for chances to answer them. And I feel strength from the generations that have come before me, and not a day goes by that I'm not filled with gratitude for them, and that I don't thank God for the life that's in me on account of them."

"What does this all have to do with Alicia?" I asked.

"It's through the generations that strongholds form," answered Ranald. "Childish mischief may cause great ill. But it does not become a stronghold of evil until it's passed on from one generation to the next. Then the danger is great of the thing sending down roots that are hard to dislodge, and becoming perpetuated on and on to the third and fourth generations like the Book says*, and its evil spreading out and preventing hundreds and thousands from getting at the light of God's life inside them."

As I listened, my thoughts went back to my conversations with Ranald earlier in his cottage.

"When you spoke, or prayed . . . or whatever it was you did when you said you broke the curse against your house -- what language was that?"

"It was an angry outburst, I admit. I hope it did not frighten you, lass. But the devil angers me when he twists up folk to believing his lies. What I said was, "You lying tongue of the devil."

"And the rest, when you said, I think it was something like,

'I break the curse against my house and send it back to the fires of hell' - was that a prayer?"

"Not in so many words. But when you're conducting the Almighty's business in such realms, it's not always easy to tell one kind of speaking to him from another. In a manner of speaking, I was speaking for the Lord, not exactly praying to him, and taking his authority to break the curse in its tracks. But though I may have broken it for yourself and me, it did not break it in the lass Alicia's mind. It was still holding her in its grip, and I have no doubt that's what sent her out into the storm that way, for they say, you know, that the devil's the prince of the power of the air, and if ever he was making mischief with God's wind and rain, it was today out at Findlater. I was afraid we would lose the lass."

"But why didn't what you said help Alicia. It almost seemed to make it worse."

"It may have done just that, lass," sighed Ranald. "Sometimes when you stir up a sleeping nest of the devil's handiwork, where he's had a free hand for a long time, and you stir up his demons, they're like wasps and they don't like it, and they fight back because they know their end is near. So with the breaking came loosings in the spiritual realm that we may not have anticipated. They were fighting to keep control of what they knew they were about to lose. It's a dangerous time of spiritual warfare when the forces of evil are unleashed.

And the poor lassie herself was not yet ready to join in the battle.

She was not yet wanting to break the curse.

Fear of it still held her in its grip.

A body's got to want to be rid of the devil's mischief in their life before they can come against him with power." **

"You said the curse of fear?" I said.

Her words could not harm me. But look at the misery they've brought Olivia herself and the likes of Alicia, poor lass.

The curse was the fear it put into her -- it wasn't anything about me."

"Just now, as I sat beside her bedside and played my harp, when she woke up, something had changed. She was calm, at peace . . . as gentle as a child. She said she felt fear leaving her."

"Why the change, do you think, Marie?" asked Alasdair.

I told them about Alicia's dream. By the end of it I was crying again.

"That is absolutely remarkable," said Alasdair. He was also close to tears.

"There's many a way to break the devil's power," said Ranald.

"Sounds like in this case as if your music and the words of the Book must have gotten into her and made her want to break free herself." ****

"What words from the Book?" asked Alasdair.

"In her dream, she turned the words from Philippians 4:8 into a rhyme. It must have been her mind bringing Olivia's tactic of rhyming into the light."

"It's a wonderful thing what the mind's capable of when it's pointed toward the light. She turned the method of Olivia's curses on its head just like she was fighting it with the power of Scripture. Good for the lass! Even in a dream, she was taking up the fight!"

"What does the verse in question say?" Alasdair asked.

"It's one of the most soaring thoughts ever to flow from the great Apostle's pen", replied Ranald, his eyes aglow.

of praise, think about these things."

"What a lovely verse," I said. "But where would Alicia have gotten those words to come into her dream? I don't recall ever seeing her reading a Bible."

"No doubt from Iain," replied Ranald. "It was one of his favorite passages. He quoted it many a time from the pulpit. She must have heard it from him, and it must have lodged in her subconscious to lay there in readiness to do its healing work when the time was right. The words of the Book are miraculous with their power to heal. The music from your own little harp, and the words of the Book no doubt from Iain himself, bless the laddie, haunted her thoughts even in her sleep. Then God took them up as his weapons to pull the dear lassie out of the dark!"

We all sat pondering the remarkable turnaround that had apparently taken place in Alicia.

[End of passage from "Heather Song".] 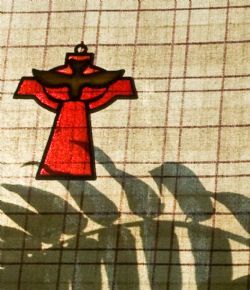 A final thought from Lindsay House:

with scripture. We did so with this passage from "Heather Song". Each place that an asterisk (*) appears corresponds to such

a scriptural reference. We encourage the reader to use a Bible concordance and/or the website, biblegateway.com, to find

the passage in the Bible that is appropriate to the context. ENJOY!