There is a tidal wave of Christianity spreading in nation after nation as never before in history. Christianity is the fastest growing religion in the world today. True faith is spreading and modern secularism is failing. These declarations are verified by research of scholars and best-selling authors such as Dinesh D'Souza, of Stanford's Hoover Institution; Phillip Jenkins, Cambridge trained professor and author of The Next Christendom; and David Aikman, Oxford trained former worldwide reporter for Time magazine and author of Jesus in Beijing, How Christianity is Changing the Global Balance of Power.

Throughout the past century, the developing world has come to recognize what it means to believe in our Lord, the Ruler of the world, who died, rose and now rules the nations from His throne on high. One hundred years ago 80% of Christians resided in Europe or America. The missionary movement, which began in England and America, has changed the world over the past two centuries. Christianity has exploded and now over 60% of the Christian believers live in the rapidly modernizing developing countries. 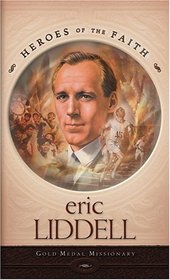 In 1925 Olympic gold medalist Eric Liddell left the fame and fortune of professional athletics to dedicate his life as a missionary to China.

China will likely become the largest Christian nation in the world within a few decades, according to David Aikman. Aikman has spent a lifetime covering the Iron and Bamboo Curtain countries and their progressive fall into the arms of Jesus. Aikman observed in his book Jesus in Beijing that Christianity is that unstoppable, loving movement that causes entire nations, like China and the Iron Curtain countries, to eventually rise up and throw off their oppressors, overturning the global balance of power. Aikman said that Czechoslovakia, as if the nation were one person, cast off her communist oppressors in a week.

Today there are 560 million Europeans and 260 million Americans who are at least nominally Christian, and tens of millions of these are still holding forth the true faith. However, the believers in the developing countries are immersed in the world of the Bible often more than the devout Christians in the West. Even though 200 million of these believers face persecution and most are under dictatorships, they are spreading Christ's kingdom with passion and sacrifice. David Aikman documents that in China the leading intellectuals, scientists and entrepreneurs are becoming Christians. As they meet in their home churches, they are training to be missionaries to the Muslim world and even to the West as they work for the doors of freedom to open in China. African believers hold an orthodox view of the inspired Word of God. Many African Anglican pastors and bishops have emigrated from Africa back to Britain and are preaching to some of the largest and fastest growing churches in the British Isles. South Korea now has 12,000 full-time missionaries in the field, second only to the United States.

Modern secularism is no match for this tidal wave of God's love and power that is moving across the earth bringing the universal liberating truths of Scripture. The non-believing world and its leaders, to maintain the façade of civilization and order, are forced to use Christian rhetoric. Evolutionary and atheistic worldviews, with their survival of the fittest and "get all you can in this life" philosophies, are incompatible with equal human rights, selfless virtues or just laws. Only if we are accountable to a perfect God to love our neighbor is there any reason to act with kindness toward the weak, elderly or unlovable.

For example, Friedrich Nietzsche, the founder of modern Nihilism, the "God is dead" movement, had to admit that all equal rights theories are Christian in origin. He said "Another Christian concept, no less crazy [to an atheist]: the concept of equality of souls before God. This concept furnishes the prototype of all theories of equal rights." What he does not say is that without these Christian derived rights, Nietzsche's own philosophy of death that he himself was free to spew in a Christian society would have certainly led him to the Gulag in a totalitarian atheistic state.

Christianity brings liberty and freedom to the world, not because its followers have money or military power, but because it is True. Revisionist historians have labored to hide the irrefutable truth of Christianity. Most people are not taught that the early Christians brought the mighty Roman Empire to its knees by the time of Constantine in 312 A.D; or that Ireland, ruled by demonic druid priests, peacefully bowed to their rightful Sovereign through the preaching of one man, Patrick, in the 4th Century; or that Germany turned from the worship of evil gods and human sacrifice to become the early center of Christendom as it enlightened Europe in the 8th Century; or that England under Alfred the Great, turned the government of the world upside down with English Common Law based upon the Ten Commandments, laws of Moses, and the Gospels; or that the great scientists of the Middle Ages from Francis Bacon, the founder of the scientific method to Isaac Newton, perhaps the greatest scientist of all time, bowed to the Savior and His eternal laws and created a modern world that reveals his Lordship and order.

The American Colonists, revived through the unleashing of the Word of God, declared that they would "have no king but King Jesus" in response to the tyranny of King George. The Americans drew up a covenant with their new King and each other, calling it the Declaration of Independence, in which they placed their reliance on "divine Providence."

Americans have been the most blessed people in history as a result. On the day the Declaration of Independence was signed Samuel Adams stood and declared, "We have this day restored the Sovereign to Whom all men ought to be obedient. He reigns in heaven and from the rising to the setting of the sun, let His kingdom come."

The great news is that once we in America understand and recapture our biblical heritage of liberty - united with believers worldwide - we may be on the precipice of the greatest revival in history!