The year was 1958 and my parents, Richard C. and Margaret B. Lindsay were stationed in Naples, Italy. It was my father's last station before his retirement from the United States Air Force in 1960.

There was opportunity to visit them, and I did so, taking the two children. Seeing the beauty of the Amalfi Coast, Mt. Vesuvius across the bay (still considered an active volcano), and the ruins of ancient Pompeii, left strong impressions.

But the strongest of all came on our trip to Rome. There we visited The Vatican, worldwide capital of the Roman Catholic Church. On another occasion while stationed in Italy, my parents visited The Vatican for an arranged audience with the Pope. The visit was of a diplomatic nature.

Long ago, to position itself for maximum influence with people in positions of governmental authority worldwide, that religious organization claimed the status of a nation/state in relation to secular nations of the world. Upon authority of the pope, priest/diplomats are sent throughout the world.

Everything at the Vatican was designed to inspire awe - the ceiling of the Sistine Chapel painted by Michelangelo, the statues of the young David (as shepherd-boy), and of the grieving mother, Mary, with the body of her crucified Son laid across her lap. These remain strong visual memories. 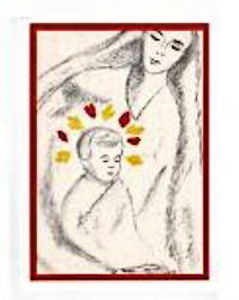 Later in the year after returning to the U.S.A., and again expecting a child,

I awoke in the middle of the night and sat down at the kitchen table. With pencil in hand, I began to draw. An image of the Virgin Mary holding the Christ Child was gradually appearing on the paper. The design included a border. Mary's head was barely inside the top-right corner, and without the traditional halo.

When the next child was several months old, there was another middle-of-the-night event -- this time involving words.

As I read the words just written, I was again in awe --  it was not the product of my intellect -- but of inspiration from God. It was called, simply,

Creative people usually hope for validation from others - especially in the

inspirational area. After due consideration, I chose to send

"A Mother's Prayer" to the following people:

(American Ambassador to the United Nations).

Each of these individuals had been touched, for they expressed heartfelt appreciation.

In a letter penned by his secretary, Pope John XXIII thanked me and gave me "a seven-year dispensation for forgiveness of sins."

be allowed to include

Ambassador Ralph Bunche wrote of his appreciation and thanked me.

These questions present themselves:

1. Were the lives of John XXIII, Eleanor Roosevelt, and Ralph Bunche affected by "A Mother's Prayer"?

Only they, and God know the answer.

2. Was the life of the mother whom God inspired to write

Profoundly. She has continued to pray and to sing it periodically.

She believes that the prayer has been, and is being answered

as she lives out her life, day by day.

3. Is it possible that each woman who prays "A Mother's Prayer" could experience the same wonderful result? And that any father who prays it from his own heart will also be answered?

We believe the answer is YES.

IT IS TIME. WE ARE IN

THE VALLEY OF DECISION.

through the non-Biblical teachings he received through Roman Catholic teaching. His priest/teachers had already received the doubts of unbelieving teachers, who carried out Lenin's 10-point plan to destroy the world's religious systems.

Let's recall that Martin Scorsese, while studying in a Roman Catholic seminary, was introduced to the blasphemous novel,

"Last Temptation of Christ", which he later produced on film.

Yes, it is time to declare our freedom under God, to seek and to know the Truth - setting ourselves and our children free to know and follow JESUS CHRIST, the only begotten Son of God.

the author presents "A Mother's Prayer" to our readers.

Attachment to any religious system invented

and administered by men,

is not the answer we so desperately need.

NO MAN COMES TO THE FATHER